He Promised To Oil My Chain, Claims Abused Bike

THE bicycle at the centre of Britain's worst case of inanimate object abuse has told how she was offered treats including expensive chain-oil, a new bell and a dynamo.

Bike 'X' said she trusted her owner and was happy for him to sit on her up to three times a day.

She told the Daily Mash: "There were times when I thought he was rubbing his bottom into me a bit hard, but I didn't say anything.

"Then, after a couple of months, he said he wanted to do more than just pedal to the video shop.

"At first I said no, but he was really sweet and would give me presents, rub lavender oil into my saddle and pump me every morning.

"Then one afternoon he came home drunk, removed my handlebars and stuck his whatnot into the metal tube.

Police say the case is even more horrific than the infamous Angle-Poise Lamp Abuser who stalked the reading-nooks of Swindon in the mid-1990s.

Superintendent Bill McKay said: "The angle-poise lamp is the inanimate equivalent of a dirty gymnast.

"But it's quite another thing to force yourself on a defenceless bike that just wants to be ridden for pleasure." 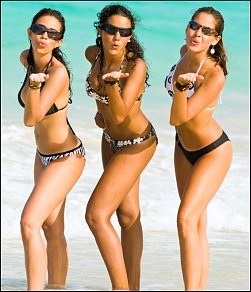 SQUADS of bikini-clad women are to be positioned outside airports in a bid to deter fanatical Islamic terrorists.

Security chiefs believe the bombers will turn back rather than confront the naked knees and loose morals of western women.

Admiral Lord West, the security minister, said: "If there's one thing we know about the Islamo-fascist it's that he hates the lovely ladies.

"When he's driving up to the airport in his petrol-filled Jeep he's expecting to see a lot of fat Glaswegians dressed in Macintoshes and the like.

"But then he turns the corner and 'whammo!' he's face-to-face with some of Britain's most delicious totty.

"His loins begin to stir, his resolve is weakened and me and my bevy of lovelies retire for a round of well-earned martinis."

The Bikini Squads are among a series of deterrents outlined by the government including a network of gigantic bollards and herds of roaming pigs.

Lord West added: "The Islamist no-likey ham and bacon. Here's hoping the site of a plump British porker will turn his stomach and send Johnny Jihad back to the desert with his tail between his legs."

The government has also announced a relaxation on airline baggage. From 2008 British air passengers will be allowed to bring back a third bin-liner filled with cigarettes and gin.