All mobiles deadly except bankers'

HAVING a mobile phone strapped to your head will produce money-making brain vitamins, investment bankers were assured last night.

A World Health Organisation study has shown that most people are at risk from having a small but intensely powerful microwave oven two inches from their cerebellum.

But experts stressed that for high-flyers in the financial sector, the radiation totally combines with their seven-figure salaries to increase their dynamic brilliance.

A WHO spokesman said: “In order to capitalise fully on the benefits of the mobile vitamins they should also call the speaking clock on a bunch of phones and then stuff them into their underpants.

“This will massively increase the potency of their sperms and ensure that humanity enjoys an endless supply of top-quality bankers.”

The recommendations are contained in a new pamphlet entitled Better Living for Bankers which lists 10 tips for a healthier banking lifestyle, including five portions a day of semi-defrosted, Albanian fish fingers and covering yourself in goose fat and then jabbing a polar bear with a fork.

Meanwhile the study, which is a study of other studies that you could actually have done yourself, found that everyone is going to get brain cancer except horribly poor people and friendless oddballs.

Dr Julian Cook, from the Institute for Studies, said: “It is difficult to be 100 per cent sure because the symptoms of brain tumours and the symptoms of the information age are remarkably similar – apathy, aggression, loss of inhibitions, irrational outbursts and an inability to construct coherent sentences.

“However, the beauty of this is that unlike brain tumours the information age can be cured by the simple act of just shutting your hellish, self-absorbed face.”

Adults order children to be sad about Daleks 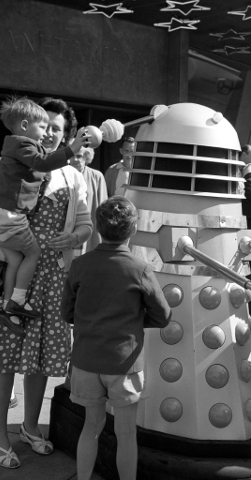 CHILDREN across Britain were today told to be all sad about the Daleks.

As the BBC announced the veteran Dr Who villains would be ‘rested for a while’ adult fans of the show over-reacted quickly and angrily.

Millions of adults have insisted children must treat the sidelining of the Daleks like the loss of a beloved pet that had been brutally strangled by the BBC.

And they have told their own children, their nieces and nephews and the children of their friends to sign their names at the bottom of a rambling, foul-mouthed letter they have composed to Dr Who producer Stephen Moffat.

Whovianist, Roy Hobbs, said: “Moffat needs to think about what he is doing to the new generation of fans who have been watching it since 1976.

“My nephew recently spent £12,000 on a mint condition Davros action figure that I have kindly allowed him to keep in my tall, slim, blue garden shed.”

But children said they were glad to see the back of the Daleks because they were rubbish for obvious reasons.

Kyle Stephenson, a nine year-old from Berwick Upon Tweed, said: “I have been watching television for a while now and my tastes have matured to the point where I prefer baddies that do not provoke a litany of incredibly obvious questions.

“I applaud the BBC for finally taking the elephant in the room by the scruff of the neck.

“Just because my friends and I are unengaged by academia does not mean we are the sort of gap-toothed cretins who are frightened by shopping trolleys.”

He added: “I’m also mature enough to recognise that my Uncle Roy needs, at the very least, to go to a prostitute.”