YOUR elderly parents are in a high-risk group so they haven’t left the house or let anyone in for the last 10 weeks. Apart from the following:

Rita from next door

What do you mean, who’s Rita? You know, Rita from next door. She came round and said she was going to distance at the bottom of the drive, but we felt silly so she came in. But she didn’t stay long. She went straight after her cup of tea.

The shopping was heavy and your dad was watching Homes Under The Hammer. He just stepped into the kitchen for half a minute and accepted the glass of water I offered because I didn’t want to be rude. You can still keep your manners.

He came in but only because he was doing some work on the underfloor heating in the bathroom. You remember we had it fitted and it’s been a nightmare. A risk? Him? We’ve known him since he was in bloody nappies, you daft apeth.

The lad from up the road

That laptop’s never worked. I don’t know why you bought it us. Anyway, your dad couldn’t get on his emails so we asked that lad three doors up if he could come over and have a look. He got it sorted in a minute flat. You should hire him at your work.

Elsie, who’s just out of hospital

Poor Elsie, she’s had a terrible time. She wasn’t in for that coronavirus, it was her hip. She couldn’t get over the step to the garden so we just had a natter in the kitchen. Elsie’s not dangerous. You folk do talk some nonsense. It’s the same on the news. 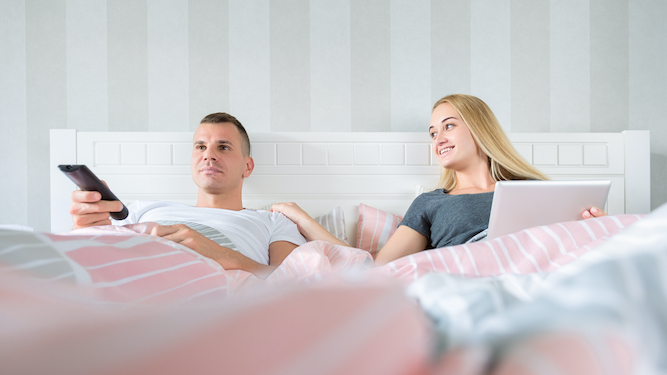 Stephen and Emma Malley have heartily endorsed the ban and are pleased to have been way ahead of the curve when it comes to not having sex.

Emma Malley said: “We’re about eight months into our sex ban, which we weirdly had the foresight to start before coronavirus even happened. No one has actually said people in the same household can’t have sex, but it’s better to be safe than sorry.

“Obviously it’s been a real strain for us. We’d definitely want to have sex three times a day every day if it wasn’t for this damned ban.

“But you can’t be too careful with these things, so we’ve reluctantly decided to flop on the sofa and watch TV every evening instead of making the crazy, passionate love that comes naturally to us.”

Stephen Malley said: “It’s basically like being furloughed from sex, and it’s genuinely as much of a relief as not having to go to work.”