Also, you shouldn't have a milkshake with a cake in it because it doesn't work, say experts

‘FREAKSHAKES’ should be banned because of their sugar content and because they are ridiculous and undrinkable, experts have confirmed.

The Institute for Studies stressed the shakes contain ‘grotesque levels of sugar’ and also that they are idiotic and make a horrible mess.

Professor Henry Brubaker said: “It’s a drink with a cake in the top. You can’t eat the cake bit with a spoon because that just plunges it into the liquid below, spilling the milkshake bit everywhere, and you can’t drink it because the bloody cake’s in the way.

“The cake gets all gloopy and nasty, the shake’s full of solid bits, it looks nothing like the pictures on the menu and before a quarter’s gone the whole thing is deeply unpleasant but it’s cost a fiver so you have to soldier on.

“Before long you’re just spooning down a kind of sweet grey sludge while grimacing and wishing you’d ordered either a milkshake or a cake instead of this monstrous hybrid that should never have been born.”

He added: “And they’ve got shitloads of sugar in. But mainly they’re just a fucking stupid idea.” 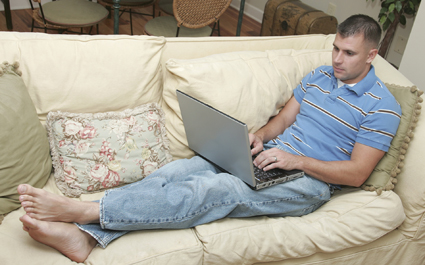 A MAN keeps getting taken in by ‘fake news’ that is obviously dodgy to anyone with a semi-functioning brain.

Wayne Hayes regularly regurgitates bollocks off the internet, even if it has a blatant agenda or is about how werewolves are real.

Hayes said: “Fake news looks so convincing. There’s just no way of telling the difference between ‘Floods in East Anglia’ and ‘UFO fires energy beam at F-15 in undisclosed location’.

“When I’m sitting at my computer browsing stories from my preferred news source, Facebook, how on earth am I meant to check whether something’s true? I don’t live in a fucking library.

“During the referendum I read a lot of stuff like ‘EU planning Sharia law in UK’. With something as serious as that it’s best to be on the safe side and vote Leave. It’s called logic.

“Also why bother to check something if it comes from a reputable-sounding organisation like ‘The British Freedom Network’?”

However co-worker Donna Sheridan said: “I don’t think Wayne is exactly fooled by fake news, he just believes things that support his political views, like when he assured me Jeremy Corbyn was ‘still in the IRA’.

“Although he is a credulous fucknut who believes there are ‘bigfoot villages’ too.”