Andrew Lansley to watch you while you sleep

HEALTH secretary Andrew Lansley is to sit next to hospital patients, looking at them while they sleep.

Mr Lansley has opted for a more ‘hands-on’ approach after it emerged his televised bedside message was making patients want to die.

He said: “I want to be the first thing they see when they wake up. Some of them may be alarmed to find my nose two inches from theirs, but I have been practicing a range of soothing noises in case they start to scream.

“I will say, ‘there, there, everything’s fine, it’s just me, health secretary Andrew Lansley – would you like some porridge?’.

“Then I will tell them how much I care about them and how watching them while they sleep makes me feel me closer to them, especially when I stroke their hair and sing to them.”

He added: “It also means that if they start complaining about the NHS I can punch them in the face.”

Meanwhile soldiers fighting in Afghanistan will be fitted with a shoulder harness carrying a small TV screen showing a gung-ho message from defence secretary Philip Hammond on a never-ending loop.

A Ministry of Defence spokesman said: “He will start by thanking them and then give them a series of hints and tips about how to kill a Taleban when your gun stops working.

“He will then finish with a hearty rendition of God Save the Queen before lifting up his kilt like something out of Carry On Up the Khyber.” 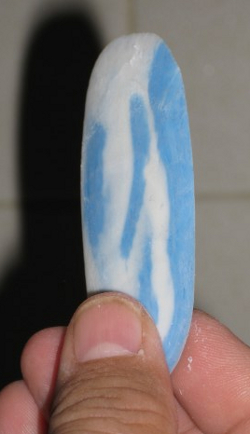 THE government’s plan to wipe out Britain’s deficit using little bits of discarded soap is not going well, David Cameron has revealed.

The prime minister said the Treasury had collected more than 50 bits of soap that had been thrown in bins after becoming too small to be of any real use.

But he added: “Despite our initial estimates, it seems they are virtually worthless.

“We may be able to reduce the deficit by 75 pence if we can somehow squeeze them all together and make one large bar of soap.”

Julian Cook, chief economist at Donnelly-McPartlin, said: “It can be difficult to pay off your debts when you don’t have any money.

“When George Osborne outlined his deficit reduction plan last year I actually wrote to him and said ‘well done, this is all makes perfect sense right up to the point where you start talking about money.

“He then sent me a photo of some bits of old soap with a Post-It note attached to it which read ‘how do you like them apples?’.”

He added: “But at least  the National Soap Strategy is not in the hands of that shit-eating, moon-faced twat who cries when he watches Antiques Roadshow.

“Presumably because he can’t bear the idea of someone making a profit.”