Announcement of vaccine not the same as being vaccinated, idiots told

IDIOTS have been warned that merely ordering a vaccine does not make them immediately immune to Covid.

Certain sections of the population have assumed that they can now go back to pre-virus times and do whatever they like, in a kind of ‘Victory Over Covid Day’.

Martin Bishop said: “Today I can visit my dear old gran and give her a hug and a big slobbery kiss, safe in the knowledge that if she does get ill, the vaccine will make her better some time before April.”

Donna Sheridan said: “Me and my neighbours have organised a big bonfire to burn all our masks to make up for missing Guy Fawkes night. Then I’m going clubbing with 20 of my mates.

“I’ve got a weird cough and can’t taste anything but it can’t be the coronavirus because we’ve got the vaccine now. Durr!”

However Josh Hudson disagreed: “I know everyone thinks that now there’s a vaccine they’re safe. They’re not.

“The whole thing’s fake. The only thing this ‘vaccine’ will do is cure you of is thinking for yourselves. Listen to Ian Brown, sheeple.”

It's not sodding aliens: Where those monoliths probably came from 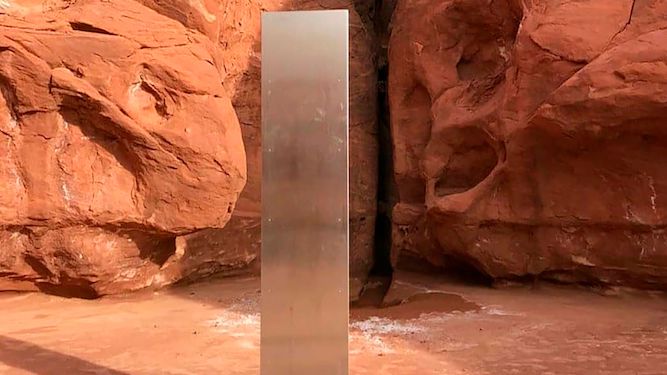 INTRIGUED by the mysterious monoliths that have been springing up around the world? Here are the boring places they probably came from.

Aliens must know humans are thick as shit, so they wouldn’t bother saying ‘hello’ by bamboozling us with metal oblongs. Even if they were trying to establish first contact they’d be more original than copying some old sci-fi film that your dad pretends to understand.

One explanation is that an engineering firm couldn’t move for all the steel boxes they’d got cluttering up their warehouse. Solution? Stick them in the desert. Better still, they were just fly-tipping, and that’s why one disappeared – to avoid a $200 fine from Utah Council.

Not Banksy’s though, because otherwise they would be covered with nuanced satirical images of spray-painted monkeys giving you the finger. They’re probably the handiwork of some sculptor you’ve never heard of who couldn’t think of anything original, so who gives a shit?

The film will be called Monoliths and it will be about monoliths appearing all over the world for reasons that don’t make sense. Mark Kermode will say it’s a ‘dizzying meta-commentary on genre film’ and everyone else will think it’s crap. Could well be Christopher Nolan’s last film.

The monoliths are smooth, sleek, and don’t appear to have a headphone jack, so they’re probably a new generation of iPhone your trendy friends will be lugging around in a few months. You think they look stupid and swear you’ll never get one, but eventually you’ll cave in because you feel silly for not owning an iLith.