THE NHS should stop helping horrid, ghastly people to have babies, according to a new report.

Researchers at the Institute for Studies say there is a 'postcode lottery' for IVF provision across the UK and the system could be made fairer and more affordable if the treatment was withheld from the horrible.

Dr Mark Hodges said: "IVF is an amazing technology which has brought joy to millions of nice couples. Unfortunately, somewhere along the way it was somehow extended to ghastly people.

''Life coaches, jugglers and those who park across two bays at the supermarket are just a few of those benefiting from state-funded IVF. This treatment is complicated, expensive and must be rationed and the best way to do it is to keep it well away from fuckers like that."

He added: 'We should be using public money to sterilise these mutants, not to make screeching, dung-ridden copies of them."

Donald and Augusta Black are a horrible couple currently being helped by the NHS to spawn vile offspring.

Mr Black said: "I'm a slum landlord who kicks kittens in the head, while my gimlet-eyed wife runs an old folks home where lonely war veterans are treated abominably.

"NHS doctors have taken my evil black spooj and my wife's demonic, horned eggs, and are currently splicing them together in a petri dish at the taxpayers' expense. Once this rancid mess becomes a baby we'll take it home and stick it in a sock drawer until it's old enough to join the BNP."

He added: "Unless of course you would like to buy it from me?"

Bankers Get Another &#163;50 Billion To Rub Against Their Genitals 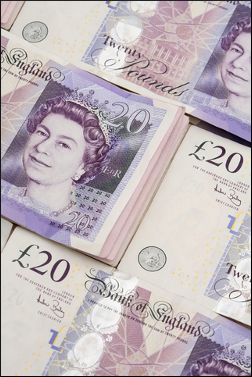 BRITAIN'S bankers were last night handed another £50bn in crisp notes to rub all over their naked, trembling bodies.

The Bank of England agreed to the new round of quantitative easing after bankers said the last lot had gone all soggy and had to be thrown in the bin.

Bank governor Mervyn King said: "I just print the stuff. It's none of my business what they do with it.

"My personal view is they should lend it to you so you can buy one of those big American fridge freezers with the double doors and the ice dispenser.

"But there's really not much I can do about it if they just want to keep it all in a big room where they can get naked and use it to stimulate their engorged, quivering glands."

A spokesman for the British Bankers Association said: "These £20 notes are too absorbent. After a good hard rubbing session they just fall apart in your hands.

"We need something tough and durable with a moisture resistant coating, like the Euro. Although it has to be said, many of our senior executives do still prefer to rub themselves with an Asian currency."

He added: "No doubt some people will be angry that bankers are being given free money and then using it for genital stimulation, but what's really bugging them is the fact they didn't have the foresight and intelligence to set up a major high street bank and then run it in to the ground."

Bill McKay, from the London School of Economics, said: "The Bank of England is either trying to stimulate the economy or destroy it. It's still too early to tell.

"But at least the bankers have had some really intense rubbing sessions, so it's not been a total waste of time."