Big-hearted man would be pregnant for a week

A FATHER-TO-BE would love to share the highs and lows of pregnancy by being pregnant for a whole week, he has revealed.

Marketing manager Tom Logan has won praise from friends and colleagues for wanting to share the experiences of his pregnant wife Sarah but not for quite as long.

Logan said: “Being ‘with child’ is the most incredible thing so I’d definitely put up with the hardships for a week to really understand what it’s like.

“I’d have to make some lifestyle changes, but the thought of that tiny, fragile human being growing inside me would really motivate me to give up smoking and eat healthily for seven days.

“When I see my wife’s baby bump I wish I could have the privilege of bringing a life into the world too. Sadly nature has decided it’s not to be, so I may as well go to the pub in a bit.”

Colleague Nikki Hollis said: “It’s brilliant that Tom wants to be pregnant even though he’d miss his five-a-side football and our regular Friday piss-up for an entirely hypothetical week.

“He’s clearly given it a lot of thought because he asked me how long it would take him to get his figure back.”

Logan’s wife Sarah said: “Last week he got stung by a nettle and described it as ‘unbearable white-hot pain that never ends’, so I’m not sure how he would deal with someone coming out of his imaginary vagina.” 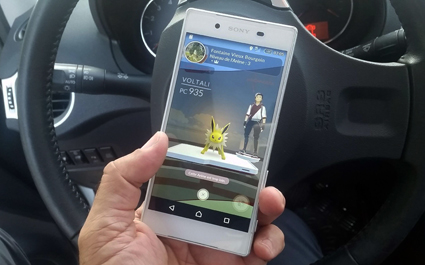 MILLIONS of Pokemon Go players have been left inconsolable after realising it is a ridiculous and pathetic waste of time.

Fans of the video game, which involves catching creatures with names that sound like sexually transmitted diseases, experienced a moment of enlightenment where they suddenly understood that it was utterly pointless.

24-year-old Nikki Hollis said: “I had just captured a little dinosaur called ‘Charmeleon’ by pointing my phone at a bush when I realised I was a grown woman behaving in the most pathetic manner imaginable.

“All my Pokemon achievements, like using ‘stardust’ and ‘candies’ to train up a tortoise with guns coming out of its shell, are irrelevant to anyone over the age of ten.”

Office manager Roy Hobbs recently became one of the first players to capture all the Pokemon. He said: “After landing my final Pokemon – a sort of caterpillar with wings called Bogalog – I felt an incredible sense of elation.

“That soon faded as I realised I was a grown man living in a childish fantasy bubble while ignoring the emotional needs of my family.

“After a short period weeping in the fetal position, I released my Pokemon army by smashing my phone.

“Now I am free to live my life, at least until they bring out a new version with cooler, more colourful monsters.”