BUSY professionals can now get their brains cleaned at their desks under a new mind-valet service launched yesterday by Rentokil.

Mobile valeting units will visit offices around the country where they will gently saw the top off people's heads before applying the hand-held Brain-O-Matic 9000.

Disruption will be kept to a minimum, and it is expected that most office workers will be able to carry on performing their tasks for the 45 minutes that their brains are being cleaned, although they will be discouraged from having hot drinks.

Dr Henry Brubaker, pioneer of the new procedure, said brain cleaning was necessary because most office workers minds were now "clogged with shit" after reading the Daily Mail on the way into work.

He said: "Many of these people find it almost impossible to function because they are terrified of four completely different health scares, while at the same time despising Keira Knightley even though she is not an immigrant."

Dr Brubaker said the worst mind his team had encountered belonged to a 34 year-old marketing manager who read the Daily and Sunday Express.

He said: "Almost 90 per cent of the brain was clogged with thoughts about the murder of Princess Diana by Prince Phillip and MI6, while the rest was consumed with a gradually increasing hatred of Moroccans." 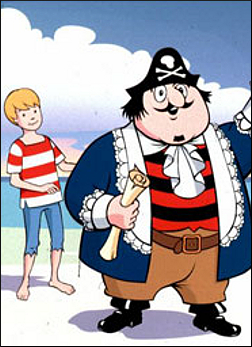 BRITISH children have stepped up their demands for television programmes they will be able to bore each other with at dinner parties.

As a debate begins on the future of children's television, the nation's youngsters say they are worried they will not be able to have hilarious conversations about the sexual inclinations of a wide range of animated characters.

Eight year-old Wayne Hayes from Stevenage said: "Teletubbies has some mileage because of all the freaky gay stuff and the insidious catchphrases, but it does not have the same sense of wonder you get with a Mr Ben or an Ivor the Engine."

He added: "I want to be able to chat-up vacant birds using my hilarious observations about the TV shows I'm watching now. I want my Captain Pugwash. I want my Mary, Mungo and Midge."

Media analyst Bill McKay said: "Our generation can have a genuinely interesting debate about the attractiveness of Valerie Singleton or Lesley Judd, whereas I think there is now universal agreement that Konnie Huq is a total pump."

He added: "Just last week I was at a dinner party where I was playfully reminiscing about The Clangers. I even did my famous impersonation of the Soup Dragon.

Roy Hobbs, a media analyst, said: "I was at the same dinner party and I did a fantastic impersonation of Idris the Dragon, but everyone seemed to be in a Clangers mood. Fuck Bill McKay."