Britain to get laid-back, breezy Australian cigarette warnings after Brexit

BRITISH tobacco warnings will be replaced by Australian ‘You probably won’t get cancer, mate, but go easy in case’ warnings in the event of a no-deal Brexit.

The UK will no longer be allowed to use harsh EU warnings and instead will print chilled Aussie ones, including ‘Not when the little buggers are about, mate’ and ‘Have a tinnie inbetween’.

Health secretary Matt Hancock said: “Australia isn’t like the nanny state EU. They know that the real dangers in life are riptides, crocodiles and spiders hiding under the seats of outdoor lavatories.

“So their health warnings on cigarettes, which at worst will save you the bother of spending your 70s in a care home, are relaxed, proportionate, and friendly.

“Pictures will include a cancer patient nonetheless smoking a fag and giving a thumbs-up, a tar-blackened lung riding the surf on the Gold Coast, and an outback-dwelling uranium miner with a ciggie in one hand and a Western brown snake in the other, laughing.

“There will be no impotence warnings because the condition is unknown down under, and nothing about smoking in pregnancy because those girls have got enough to worry about.”

Most popular stag-do activity is 'testing limits of friendship' 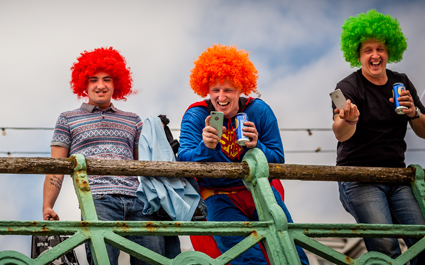 THE most popular activity on a stag weekend is to test the limits of a long-term friendship, according to new research.

The Institute for Studies found that paint-balling, go-karting and golf have been overtaken by pushing a previously healthy relationship to the brink of annihilation.

Professor Henry Brubaker said: “Make sure the weekend involves long distance travel, preferably overseas, and costs more than anyone would reasonably want to pay. Everyone will resent it.

“Airport drinking should be unreasonable and exhausting. This will create a bitter division between those who would rather be at home reading a book and those who think that getting a drunk in an airport is not tawdry and pathetic.

“The relentless alcohol, the ghastly strip clubs and the increasingly emotional hangovers will exacerbate the weird dynamics that already exist within the group. Bullying and intense rivalries will emerge within the first 24 hours.”

Professor Brubaker added: “Take things to the brink by maintaining the sort of unbearably shit banter that will fill the intelligent, sensitive members of the group with a scorching hatred.

“And insist on using a kitty.”