Britain Urged To Use A F*cking Hanky

AS cold and flu season takes hold across the nation millions of sufferers have been told to use a hanky or just fuck right off.

Workplaces are now in the grip of constant sniffing, ranging from brief but repetitive 'tidy-up' sniffs to long, rattling, fluid-ridden stomach churners.

Wayne Hayes, deputy director of the Health and Safety Executive, said: "You may think it's not your fault that you've got a cold, but it is. So – for the love of God – just buy a packet of FUCKING HANKIES.

"As you sit there sniffing all day, you're not just dripping germs, you're making everyone hate you.

"They no longer see you as simply a colleague with a cold – you have now replaced Edmonds in their darkest, most violent torture fantasies.

"But here's the thing: You can only blow your nose if you get off your pathetic, under-qualified, shit-at-your-job arse and BUY SOME FUCKING HANKIES, YOU TWAT."

Hayes added: "Wandering about the office all day with that sorry fucking look on your face. Sniff, sniff, sniff. Just fuck off, you total bastard." 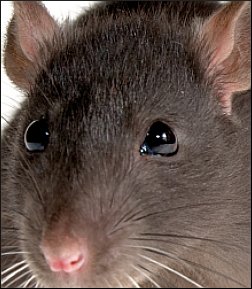 A LABORATORY bred mouse which is immune to cancer will not stop smoking and has become ‘a nightmare to live with’, researchers say.

The genitically modified ‘supermouse’ has trebled the number of cigarettes it smokes from 20 to 60 a day, and taken up cigars and a pipe.

It eats nothing but beef and has bought itself a motorcycle to drive to swingers’ parties where it indulges in casual, unprotected sex. It has also started taunting cats.

Dr Roy Hobbs, head of cancer at the Institute of Mice, said the mouse had turned into ‘a right bastard’ since learning of its near immortality.

“The whole place just stinks of fags and mouse sick. Every time I turn on the light he is at it with one of the other mice, staring back at me with this big ‘fuck off’ grin on his face.

“I asked him if he’d like to go on a little run in his wheel the other day and he told me he’d much rather have some skunk and a go on my assistant Rebecca. He’s disgusting.”

Friends of the mouse say he was a happy family mouse with a good job and prospects before the doctors introduced him to cigarettes and alcohol as part of their experiment.

“I don’t think I had ever seen him drunk before, and if he did smoke it was maybe the odd slim Panatella on his birthday or at Christmas. They’ve created a fearless monster,” said one.

Pest control expert Bill McKay said the scientists were “foolish meddlers” who had obviously never suffered an infestation of mice.

He said: “Why don’t these tossers invent a mouse which drops dead when it shits on my kitchen floor?”