Now in its 14th year, the prize is awarded by the Literary Review to highlight the difficulties of writing about quivering members, supple thighs and endless spasms of forbidden pleasure.

According to the judges Oliver's recipe displayed an "alarming indifference to the complexity of human sexuality" and a "profound misunderstanding of what it means to be a chicken".

"Get hold of a nice, plump free-range chicken. I get mine from Sainsburys but why not try your local butcher or a farmers' market?

"Rub it all over with olive oil, garlic and salt. Roughly chop some fresh sage and thyme and rub that in there too. Great fun.

"Batter your chestnuts in a tea towel and then mix them with the rest of the garlic, a squeeze of lemon juice, a pinch of salt and a dash – no more – of Worcester sauce.

"Grab a large handful this mixture and push it right up inside the cavity of the bird.  Then cook at 190C, gas mark 6, for about an hour and a half.

"Take the bird out the oven and let it rest for about 15 minutes. Then – and only then – can you safely insert your penis. 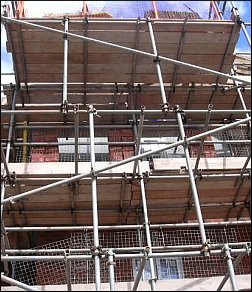 MILLIONS of arses manufactured by the industrial giant Mitsubishi are being recalled after a series of catastrophic bottom failures, it emerged last night.

Two arses blew out at high speed on the Eurostar to Paris yesterday morning leaking clouds of noxious gas, and officials said it was a miracle that no one was seriously hurt.

In Belfast a woman was knocked unconscious when a builder’s rear failed completely while he was working on scaffolding, landing on her head 30ft below.

Wayne Hayes, Director of Bottoms at the Bum Institute, said anyone fitted with a Mitsubishi should contact their GP or local dealer immediately to arrange an arse safety inspection.

He said: “There is no need to panic, but I would advise anyone against excessive straining until they have had their bum inspected properly, and if necessary, tightened.”

Arse failures are comparatively rare but the effects can be dramatic. The Queen’s bum once cracked during the Trooping the Colour, frightening her horse and several members of the public.

Mitsubishi said it was writing to everyone who had bought one of its arses over the last two decades to tell them to bring it to a showroom so its technicians could get a close look.

Customers will be asked to bend over, pull their cheeks apart and blow gently from their anus while a mechanic inspects the arse and makes any necessary adjustments.

Nikki Hollis, company spokeswoman, said: “I had mine done this morning, I've let off a few rippers since, my knickers are in shreds but the arse is solid. It’s like brand new.”