Amid claim, counter-claim and claim again, Mr Brown told a Downing Street press conference: "I was informed for the first time on Saturday night that I was prime minister.

"As far as I was aware I had never met this Mr Brown. Neveretheless, I took full responsibility and immediately sacked the person who told me."

The scandal, already dubbed 'Whatabunchoflying- bastardsgate', took a fresh twist yesterday as the prime minister insisted he did not know the Labour Party had been given £700,000 by a brickie.

Mr Brown told reporters: "Harriet Harman is so ghastly, isn't she? I'm not saying she's a drug dealer or a pimp – that's for her to answer – I'm just saying that she's quite clearly at it and will be gone by the end of the week.

"And she better resign when I tell her to. If she doesn't we'll hold cabinet meetings behind her back until she gets the message."

The prime minister also pledged to return any illegal donations, but admitted the party would now be forced to sell Douglas Alexander to the Sultan of Brunei.

Pointing to the early successes of his premiership, Mr Brown added:  "I'm really more of an animal diseases kind of prime minister.

"Bluetongue, foot and mouth, H5N1 – that's really my forte. I know all the names and I'm very good at setting up exclusion zones.

"In fact, some of you are probably thinking, 'he'd make a bloody good vet'. And, d'you know what? You may well be right.

"I can just see myself tootling around the Dales in my battered but reliable Austin 7, a side of bacon from old Mr Otterthwaite and my arm all the way up a cow." 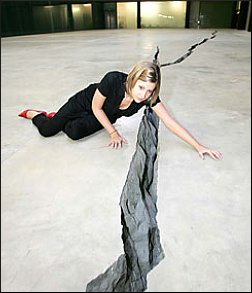 THE huge crack in the middle of the Tate Gallery has become a seedy hangout for tiny, drug-abusing Borrowers, the Daily Mash has learned.

More than a dozen visitors to the central London exhibit have fallen into the crack only to be beaten and robbed by heroin-crazed, three-inch junkies.

Known simply as 'The Crack' among the capital's Borrower community, the 580ft long artwork was once a thriving thoroughfare for the miniature people until a visiting art history professor accidentally dropped a small plastic bag filled with cocaine.

"Very quickly the whole neighbourhood was awash with the stuff and it wasn't long before the dealers and the hardened criminals moved in," said Wayne Hayes, a Borrower outreach worker.

"It's very dangerous to venture in there after dark. Tiny drive-by shootings are commonplace and every street corner is occupied by gangs of incredibly small prostitutes."

Police believe that organised gangs of Borrowers are forcing rich tourists into the crack either by tying their shoelaces together or baiting the widest sections with Brussels paté.

"Why else would so many of them have fallen in?" said Superintendent Bill McKay. "It's not as if they're all complete morons."