British Doctors To Buy Their Own Country

THE collective wealth of Britain's doctors is now so vast that they have clubbed together to buy Croatia.

After an extensive search the British Medical Association settled on the historic Balkan nation thanks to its mild climate, clean beaches and high quality skiing.

Bill MacKay, a consultant paediatrician from Reading, said: "We've all got private zoos, we've all had Prince Andrew perform at our children's birthday parties and most of us have our own little Scottish village where our word is law. But it's not enough.

"After the last round of pay negotiations with the Department of Health there was so much money. It just kept coming. It was a bit like Goodfellas, actually.

"Anyway, we wanted a very large place we could legally call our own. A place where we could relax with other doctors and not be bothered by people who didn't spend five years at university."

He added: "We almost bought half a dozen countries in West Africa until someone made the very good point that they're full of sick people."

After exchanging contracts with the Croatian government at the end of August, the doctors will carry out extensive refurbishment of their new country – including 350 new golf courses and a vast network of Jaguar dealerships – while retaining much of the original character.

The BMA said a small number of Croatians will be kept on as staff, while the rest will be dispersed across western Europe.

Croatian doctors will be allowed to buy a timeshare.

Sun 'Nothing To Do With Earth's Climate' Say Boffins 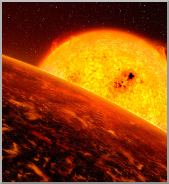 THE Sun has “no influence whatsoever” on how hot the earth is, according to a new scientific study by Glasgow’s Clyde University.

The Earth gets hotter during daylight hours due to a combination of the heat given off by trendy coffee shop cappuccino machines and people “just moving around a lot”, the scientists said.

And it gets cold when the Sun goes in because everyone turns their central heating off at the same time and “it just does”, added research team leader Professor Tom Booker.

Meanwhile winds are caused by trees waving their arms around a lot, he said, while rain is really just God crying.

Prof Booker, head of climatology at the University, said the research was conclusive proof that global warming was man-made, and largely caused by Starbucks.

He said: “Before Starbucks average temperatures on all of the Earth were ten degrees below freezing and everyone had to wear long johns all year around.

“After Starbucks the Earth became so hot you could not touch it anymore, and many people had to stop wearing any underwear at all.”