A COUPLE who regularly enjoy cocaine cut with a range of unspecified powders are suspicious about exactly what will be in the Covid-19 vaccine.

Lauren Hewitt and Ryan Whittaker have confirmed they will skip any injections until they know it is totally safe, like the street narcotics they take.

Hewitt said: “There are far too many unknowns in a new vaccine and I’m not being a guinea pig for a substance that could end up killing me. Is what they’re doing even legal?

“Being immunised with an unknown formula is not like when we buy a couple of grams of pure coke, with its slight smell of Persil, lingering taste of soap and the odd slug pellet in.”

Whittaker added: “The danger of the vaccine is something me and Lauren debate a lot. We find we do our most lucid thinking when we’re gurning from the hit of whatever the f**k it is we put up our noses.”

What to do if you meet a QAnon fruitloop 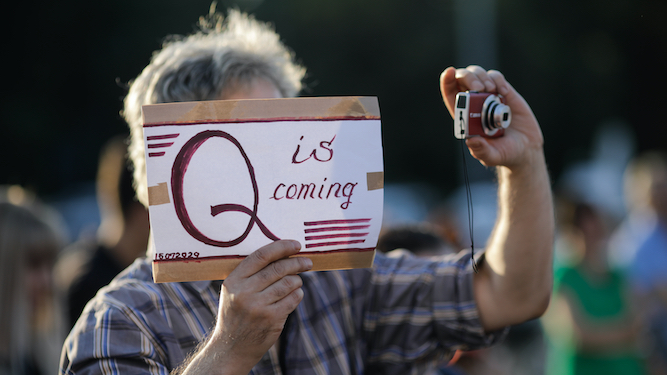 HAVE you been cornered by a nutter who believes Donald Trump is the secret saviour of trafficked children who are imprisoned in the basement of pizza shop? Here’s how to deal with them.

Use reason and logic

If you previously thought this person sane, try using stuff like reason and demonstrable facts. However, if they truly believe that Hollywood actors are kidnapping children and keeping them in a secret tunnel under the Gateshead MetroCentre, you will have a job on your hands.

Ask them if they’ve ‘lost their fucking mind’
You might hope that directly questioning their sanity will give them the reality check they need. They are likely to respond by telling you that they have saved their mind from being remotely controlled by a microchip implanted by Bill Gates disguised as their local GP.

Take away their internet
People who think the ‘lamestream media’ is lying to them don’t seem to have the same concerns over a weird bloke called Alan who befriended them on Facebook and started telling them David Icke really knows what is going on. Throw their smartphone in a river.

Be madder than them
Coming up with theories even more outlandish than theirs may make them wonder if what they know is true. But remember: They believe John F Kennedy Jr faked his own death and went into hiding for 20 years to join Trump’s secret evil-fighting organisation, so you will have to think outside your box.