ANYONE catching a cold can sue the person who gave it to them, according to an EU ruling.

Legal experts ruled that anyone too ignorant to cover their sneezing nose with paper was effectively stealing several days of life from those around them.

Human rights lawyer Dr Mary Fisher said: They would come into our workplaces, our cafes, our homes and disperse mucus without fear of redress.

Every Lemsip, every soiled tissue, every episode of Dickinsons Real Deal groaned through should be paid for.

Successful claimant Stephen Malley said: “I told my brother-in-law. I said, you’d better not give me that cold. But he did, and now he has to sell his house.

The ruling has established a lengthy chain of claims which could eventually include 65% of the population, with every carrier sued initiating legal proceedings against the person infected them.

Roy Hobbs, who brought the original case, said: I was laid up in bed with an absolute stinker on my birthday in November last year while the colleague who gave it to me went out to a firework display.

Unfortunately, that infection of rhinopharyngitis has, over the course of a full year, been traced back to me again and I now owe 2,319,044 people more than £26 billion in damages. 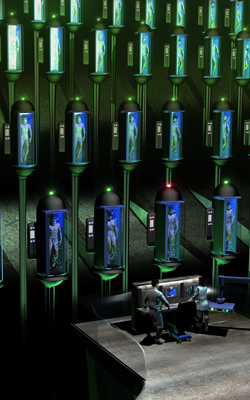 SUPERMARKET giant Tesco is to scan faces as part of a plan to murder shoppers and replace them with clones.

The corporation is photographing customers on its garage forecourts, then using the images to create identical, obedient copies.

Shelf stacker Tom Logan blew the whistle on his former employers after stumbling on its ‘pod room’ while restocking deodorants.

Logan said: “It was a vast basement full of transparent cylinders, each containing what appeared to be a human.

“As I watched in horror, one of the pods opened and out stepped the goo-coated clone of a woman who comes in to get fags twice a week.

“Lab-coated Tesco scientists wiped the slime off her and she said “Must shop” in a weird monotone before marching out.”

A Tesco spokesman confirmed: “We will photograph your face and body on our garage forecourts, use this information to make a clone using horse DNA and then when it’s ready you die in your sleep and it replaces you.

“There’s no point trying to hide it as no-one can stop us.

“We were fed up with the general populace being unable to use our self-service checkouts without getting ‘unexpected item in bagging area’. How fucking hard can it be?

“Hence we needed to make a slightly more bovine version of the public.”