Fifty NHS hospitals, all of them based in the North, currently offer treatments for dark art dabbling to the local community.

But wide-ranging government cuts have required a review of all procedures developed before 1465, or involving the consumption of any ingredient with the suffix ‘bane’.

A BMA spokesman said: “There is no scientific proof that these methods work, although when Jan Moir accidentally fell into a witch-ducking pool at Manchester General Hospital, she did turn into a swarm of flies.

“They hovered over the sexual health clinic for half an hour, attacking all the outpatients, before heading off toward Canal Street, buzzing furiously.”

The NHS spends over Â£80m a year interrogating cats and reading dove entrails to investigate reported cases of witchcraft.

Dr Martin Bishop, a consultant Witchfinder in Carlisle, has defended the work of his department, despite having failed to conclusively prove a case of witchcraft since 1972, when a woman was admitted to his ward after locals discovered she could read.

He said: “What the critics choose to ignore are the many people who feel better after we’ve stuck pins into their grandmother for a bit to see if she’ll bleed.

“There’s no ‘scientific evidence’ to prove it works, but what does ‘science’ really mean anyway?”

Or We Could Just Hang Them All, Britain Tells Clarke 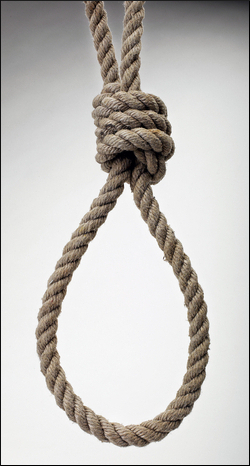 JUSTICE secretary Kenneth Clarke still thinks there are people in Britain who do not believe in capital punishment for just about everything, it emerged today.

As Mr Clarke set out a new approach to penal reform, including fewer custodial sentences and a greater focus on rehabilitation, people across the country said that sounded absolutely fine, as long as it also involves hanging them at some point.

Tom Logan, perched at the end of his tether in Peterborough, added: “I always thought Ken Clarke was a populist politician who understood the man in the street. Turns out he’s some sort of ponce.”

Helen Archer, a tightly wound ball of hate from Doncaster, said: “I’ve no problem with petty criminals doing community service for a couple of weeks – picking up litter, painting fences and what not – as long as at the end of it they are taken from this place to another place, etc etc.”

And Julian Cook, a steadily worsening facial tick from Hatfield, added: “I don’t think we should execute murderers – they should be kept alive so we can study their twisted minds. And of course drug dealers should be set free immediately, as competition drives down prices.

“What I’m talking about is the grubby thieves who force you to lock your doors and pay higher insurance premiums. I’m talking about vandals who spray their ‘tags’ on beautiful, 18th century buildings or the greasy thugs who mug old ladies for fun.

“And I’m talking – of course – about people who do not indicate at roundabouts.

“No doubt there will be those who say it’s all very well talking about it but who among us would truly be willing to pull the lever? To those people I say, ‘If you try and stop me from executing someone who invents computer viruses that force me to update my PC every 30 seconds, I’ll do you first, you hippy arsehole’.”

Sociologist Nathan Muir said: “Britain is a liberal country. Homosexuality, abortion and women are no longer regarded as evil while an increasing number of people believe in the legalisation of fantastic drugs.

“But if you even think about stealing my car, I want you fucking dead.”