MIXING alcohol with energy drinks stops you from falling asleep in discos and makes you fornicate like a rabbit, leading doctors warned last night.

Researchers found that people who downed the hugely popular mixer cocktails were hugely more likely to have drunken sex that went on for hours than those who just stuck to alcohol alone and could only manage it once.

Bill McKay, director of drink at the Institute of Drink, said: “You really should not touch these things at all, not unless you want to expose yourself to a huge risk of drink and sex binges that go on all night long.”

According to Dr. McKay, mixing popular energy drinks like Red Bull with various forms of strong spirit produces a complex chemical reaction in the brain which ensures that even repulsive people still regularly end up in bed.

He said: “Mixed together they trigger a number of receptors in the frontal lobes linked to desire and bad vision. So at the end of the night anyone still standing is guaranteed a leg-over, even the munters.

"These things are the best thing to happen to ugly people since the invention of booze itself. Why didn’t we have them when I was at college?”

Researchers quizzed thousands of university students on their drinking habits and found most had ended up in bed having sex for hours after consuming an energy alcohol mixture, but usually with someone revolting.

Liam Halligan, 23, said: “I went home with Kylie, and woke up with something that looked like a pig in knickers. I’ll never touch the stuff again.”

Mary Quinn, 22, said: “I woke up covered in pus because all his spots exploded when he went off. I'll never touch him again." 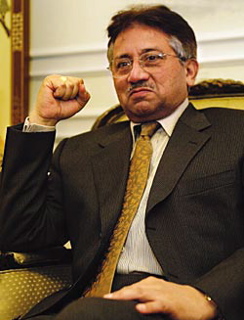 PAKISTAN president Pervez Musharraf was last night accused of ‘cynical populism’ after he ordered his police to round up thousands of lawyers and hit them with sticks.

Opposition politicians branded the attacks an empty pre-election stunt for the cameras, and pointed out that millions of Pakistani lawyers were not even given a slap.

At the United Nations, an emergency session called to assess the situation unanimously backed a motion urging the General to hit the lawyers “really, really hard”.

Ban ki-Moon, the UN secretary general, said: “Maybe it is a stunt. Who cares? The guy is giving lawyers a right old panning. That can only be good.”

Malik Abdul, 46 a marriage forcer of Lahore, said when he first saw the police beating the crowd he screamed at them to stop, but when he was told that they were lawyers he asked if he could join in.

He said: “Every time I come out of my lawyer’s office I feel like I have been mugged. Death to the devils in pin-stripes.”

However, his friend Imran Saaed, 37, a bearded fundamentalist, was highly critical of the police tactics, saying he never once got a chance to have a crack.

He said: “I went home especially to get my cricket bat, but when I returned I was told only uniform police could hit the lawyers. What kind of country of democracy is this?”

Omar Khan, 34, a westernised liberal, said he was disgusted that Musharraf thought that he could secure his position by attacking members of the legal establishment.

He said: “Anyone can beat a lawyer. We want someone who will put the testicles of every traffic warden in a vice and then squeeze them, a man who will take all our estate agents out into the desert, force them to dig their own graves and then shoot them like dogs. That is a strong man.”