It’s been three days of Australian dominance. I’m thinking the only thing that can save England from certain defeat is for a real rain to come along and wash away all these scum-sucking Aussies…fucking Mau-Maus.

I gotta get in shape. Too long sitting in corporate hospitality nibbling canapés. Time to put on my blue cagoule and hit the mean streets of Headingley. My body is a temple. I train on pork scratchings and scotch eggs alone.

I met a girl today – what was her name? Oh yeah, Betty. Betty’s doing real important work in the campaign to elect Geoffrey Boycott as Yorkshire CC President, whatever the fuck that is. I keep getting pains in my head – I think I got brain cancer, or maybe it’s because I got hit in the skull by a cricket ball when I was walking past the confectionary stall. I don’t know. Anyway, I asked Betty out on a date today, and she said ‘yes’. I think I’ll get her a present.

We went to Harry Ramsden’s that night and I ordered two fish suppers with all the trimmings. Everything was going real well, I think she liked the Showaddywaddy album I bought her, and the packet of Orange Matchmakers. Betty gets up and goes to the bathroom just as the food arrives, so I thought I’d surprise her by putting mayo on her fries. ‘That’s disgusting,’ she says and walks off, crying. I chased after her, pleading with her to see reason – I thought everyone liked mayo on their chips. Damn! I gotta shape up. Damn!

It’s time for action. I look in the Yellow Pages for an arms dealer/fixer/drug dealer/pimp. Luckily there’s one just down the road. I buy a .44 Magnum, this small Colt – good balance – a Walther PPK, and he throws a leather holster in for free. Nice. The guy was a real hustler. ‘I can get you anything – Rubik’s Cube, 20 Lambert & Butler, the new Thompson Twins album.’ ‘Thanks,’ I told him, ‘but no thanks.’

I’m at the ground for the final day of the Test. England take a wicket. Nice fucking game. So I stand there and clap, real slow – ‘clap-clap-clap’. Then this voice comes over the PA: ‘Will the gentleman with the mohawk, wearing a combat jacket and a pair of Foster Grant sunglasses please stop moving behind the bowlers arm.’ Get to fuck, I think to myself, before moving away to sit in the cheap seats.

What do you know? A couple of hours later, hundreds of people are running on the pitch and England have won an historic, like, victory. I smile, look down at my half-empty can of Long Life and make the decision not to slaughter the 1981 Australian tourists in cold blood. 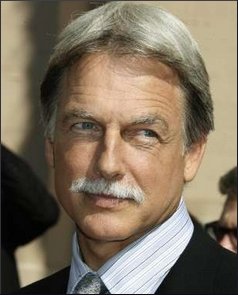 THE long wait is over for fans of fast-moving US police dramas as Channel Five screens the new series of Crime Scene Navy Crime.

The complex drama, known as CSNC to its legions of fans, is America's most popular show about a team of ocean-going forensic detectives.

Gil Gerard, who shot to fame as the star of Buck Rogers in the 25th Century, plays Navy Crime Forensic Investigations Officer Gavin Barton, a dedicated but cynical veteran who still holds the naval record for tying the most knots inside a minute.

The two characters are at the centre of a tantalising will-they-won't-they sexual jousting match.

Wayne Hayes, a media analyst said: "There are very few shows left about forensic detectives where so much of the action takes place in a naval setting.

"CSNC is continually challenging the viewer and finding new ways to investigate crimes that have been committed at sea."

He added: "I love the way they use special effects so that you can see what's happening inside the brain of the detective as, piece by piece, he uncovers the childhood betrayal that led to the theft of a walkman on board the USS Walter Mondale."

Since 1996 the CSNC franchise has generated 37 spin-offs including CSNC: Aberystwyth, CSNC: Gone Fishin' and CSNC: Rascals of the Barbary Coast.