THE fewer NHS doctors and nurses you have the more patients you can treat, according to a government commissioned report.

Management consultants McKinsey have proposed a massive reduction in NHS clinical staff in a bid to drive down the length of time people are waiting to be treated by them.

The report added: "The quickest and most efficient way to reduce a waiting list is to dismantle the very thing that people are waiting for.

"Imagine if you were queuing outside a cake shop and an RAF Tornado came along and demolished it with a laser-guided missile. You would soon ask yourself, 'what am I actually queuing for?' and very quickly you would find that the queue has simply disappeared."

Matthew Elliott, director of the TaxPayers Alliance backed the report, adding: "The NHS could easily be run by four or five janitors, each armed with an All Creatures Great and Small DVD.

"I know it's vets but All Creatures Great and Small is much cheaper than the Grey's Anatomy box set, and anyway, it's all the same pipes."

Meanwhile the BMA stressed that any move to cut costs by shaving so much as a penny off doctors' average pay of £110,000 a year would be met with a 'Harold Shipman-like' response.

A spokesman said: "We'll inject all of you and then if the cops get suspicious we'll stage a fake flu-jab session at every police station and inject all of them too. We fucking dare you."

Tom Logan, professor of medical politics at Reading University, added: "Of course there is always the merest outside chance of a vague possibility that the government commissioned this report just so it could then reject it." 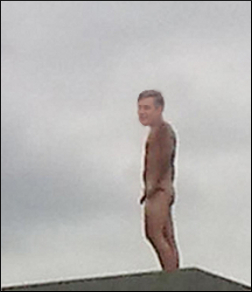 The prime minster had spent four hours exposing himself to fascinated tourists at the end of what Downing Street aides described as a 'particularly stressful day'.

The prime minister took control of the plinth at around 4pm after winning a nude wrestling match with Justin Holwell, its previous naked occupant.

A Number 10 spokesman said: "We had spent much of the day dealing with the latest developments in the Lockerbie mess and by mid-afternoon the prime minister had started to twitch and hum, which is always a clear signal that he is starting to unravel.

"To lighten the mood someone mentioned there was a naked man on the Trafalgar Square plinth, and everyone had a chuckle, except the prime minister who suddenly got this weird, faraway look in his eye.

"I immediately went to fetch his pills but I was too late. Within moments he was out the door and striding up Whitehall shedding items of clothing along the way. By the time he got to the plinth he was down to nothing more than his socks and shoes."

Mr Brown climbed onto the plinth and quickly overcame Mr Holwell in what one eyewitness described as a 'quick but horrifying bout of naked sumo'.

The prime minister then stood motionless for four hours, occasionally breaking his silence to shout 'I am Gordon, here me roar' followed by a brief performance of the Morecambe and Wise 'Bring me Sunshine' dance.

Business secretary Peter Mandelson arrived at 7.45pm and gradually talked the prime minister down before covering him up with a blanket and guiding him gently into the back of a people carrier.

The Downing Street spokesman added: "We've got another nine months of this. I don't know what we're going to do."