A MIDDLE-AGED former raver can no longer cope with the physical and psychological effects of a can of Red Bull, he has admitted.

42-year-old Stephen Malley, who used to neck vodka Red Bulls at 4am while smoking skunk and waiting for the second E to calm down, had a single can at 8pm last week and seven hours later was staring in the mirror terrified he had an irregular heartbeat.

He said: “I used to laugh at people who thought Red Bull even had an effect. But this shit’s no joke.

“I was still wide awake at midnight but went to bed, thinking it’d settle down after I’d read a bit of my book. It was only when the lights went out that the real trip started.

“There were galaxies pinwheeling across the ceiling, lost thoughts chasing each other around my head, my pulse racing while I fought the overpowering urge to clean the bathroom.

“I finally came down not long before dawn. The kids woke me up slumped asleep on the sofa. I’ve been suffering violent mood swings ever since. Never again.”

He added: “The government needs to think about regulating that stuff. Maybe even banning it.” 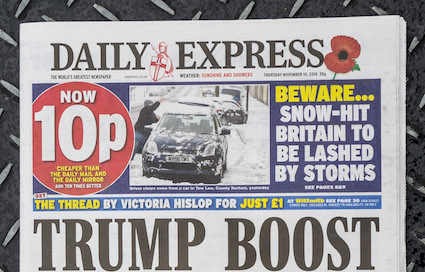 THE owners of the Daily Mirror have offered to buy the paranoid nightmares of Britain’s racist pensioners.

The media group wants to take over millions of nonsensical ideas about immigrants, transgender communists running the BBC and the 12 most effective ways to cause and/or prevent arthritis and dementia.

A spokesman said: “We can squeeze another 10 years of ad revenue out of this demographic before they all die.

“If you’re an elderly racist who wants to live forever you will have found that last paragraph absolutely exhilarating.

“Now look at this picture of the Queen wearing a lovely hat for just TEN PENCE! (less than some other sack of shit).”