Giving up alcohol, cigarettes and sugar simultaneously 'not a problem', experts insist

JANUARY is the perfect time to stop smoking and drinking alcohol while simultaneously eating healthily and taking up exercise, experts believe.

Doctors have advised the public that any changes to unhealthy lifestyles should be made all at once and to the most extreme extent possible, not gradually.

Dietician Dr Carolyn Ryan said: “Why stop at cutting out sugar? Cut out fat as well. And carbs. And you know what else is bad for you? Coffee.

“It’s no problem going from two bottles of wine a night to absolute abstinence, not if you’ve got willpower. It’s actually easier than the other way.

“Sure, only eating salads and drinking water is a bit of a change, so best make it into a major change by training for a marathon at the same time.

“And you know what’s good for whiling away the hours on a treadmill? Finally reading that Ulysses you got on Kindle last New Year. Stop slacking.”

Migrants 'should have to perform passable Morris dance' 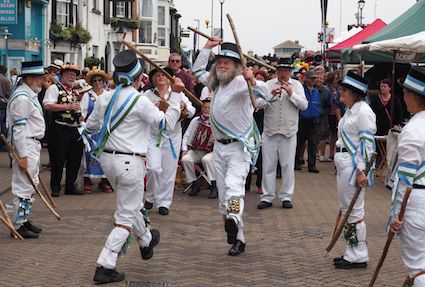 ANYONE coming to the UK will need to demonstrate a respectable ‘backswagger’ and ‘caper’, say MPs.

A cross-party group has insisted that anyone hoping to play a part in British life must at least be a competent ‘foreman’ or ‘bagman’ in a Morris dancing set.

Tory backbencher Denys Finch-Hatton said: “It would be sufficient for a prospective migrant to strap on a baldric and give us a jig. I don’t think that’s asking too much.

“It’s hard to imagine how someone who can’t execute the most basic of backswaggers could ever truly integrate into British society.”

The Morris dancing proposal has met with warm support from the Home Office, who believe it could make policing the UK’s borders far simpler.

A spokesman said: “Demanding that migrants do a Morris dance would reduce migration by close to 90 per cent.

“Britain’s okay to live in, but it’s not worth strapping bells on your back and prancing around like a twat.”