LEAVING the EU will give all Britons the power to turn invisible and the strength to lift a car with one hand, according to a government report.

The study found that predictions of economic ruin were as inaccurate as claims that a radioactive spider-bite would kill Peter Parker, and that hard Brexit will give Britons extraordinary powers.

A government spokesman said: “The patriotic rays given off by a good, hard Brexit will initially leave Britain dazed but it will then discover it has incredible powers and decide to use them for good.

“At the basic level this means flight, super-strength and some measure of invulnerability, and on top of that you’ll probably be able to pick from a list of options. Fireball-shooting powers from column A, shapeshifting from column B, that kind of thing.

“However, Remainers will likely be horrendously disfigured in the Brexit and will turn their powers to crime and evil pro-EU positions, so we’ll have to fight them. 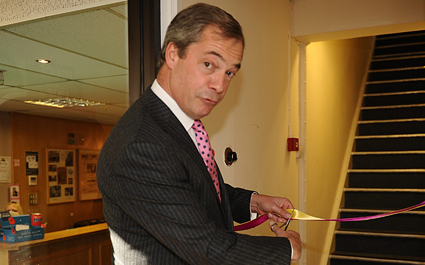 NIGEL Farage will wear a white dress and heels to serenade Donald Trump at his presidential inauguration, it has been confirmed.

With many high-profile performers rejecting offers to perform, the former UKIP leader has promised a ‘sultry’ and ‘husky’ rendition of Happy Birthday.

“As well as being sensual, I am delicate and vulnerable, like a bird in a gilded cage, and I want to bring that across.

“Paul Nuttall might to a bit on his banjo too, if there’s time.”

Farage believes that a successful performance could lead to some sort of courtesan role that involves feeding Trump grapes while wearing a leather uniform.