THE government has told people to watch BBC soap Doctors before calling their GP just in case the show includes a storyline about their condition.

Health secretary Jeremy Hunt claimed that if everyone watched the daytime show it could potentially save the NHS £100 billion a year.

Hunt said: “I watched one the other day where this old man fell off a ladder and hurt his back.

“So if you had just fallen off a ladder and hurt your back you would know that this was one of the very rare occasions where you should bother the NHS.”

Recently injured man Roy Hobbs added: “I set fire to my hand whilst doing some work on the shed.

“But I sat down and watched Doctors just after lunch and luckily there was a fire in that day’s episode. One of the actors playing a doctor suggested putting it out with some water, so that’s what I did. 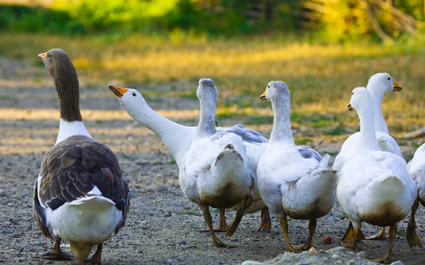 GEESE have been heavily criticised after footage emerged of them walking like Nazis.

The waterfowl were seen in mobile phone footage which showed them marching ‘just like Hitler and his troops’, leading to widespread condemnation on social media.

Twitter user Maggie_92 posted: “My grandad didn’t fly a Spitfire so that pond birds could take the piss.”

However, geese have denied any link to extreme right-wing politics and insist their walking style was based on tradition and the way their legs are attached to their bodies.

However goose Julian Cook said: “Hitler copied this walk from us, just like he stole the swastika from East Asian religious iconography.

“However I do think they should send those grey geese back to Canada. It’s common sense, there just isn’t enough bread here.”