Having a fight 'best way to burn off calories'

BRAWLING is the most effective way to shed excess weight, according to doctors.

Medical experts hailed fighting as the best exercise because it combines muscle-toning punches with the cardio benefits of chasing down or fleeing from an opponent.

Doctor Emma Bradford said: “Fighting is like boxing except you do it in the street with no referee or rules.

“The best thing about fighting is it’s free, and you can initiate a fight at any time, for example during a lunch break.

“Obviously it gets easier the further north you go, but even in civilised regions if you go up to someone and slap them hard across the back of the head they will probably fight you.

“I’d recommend starting with someone physically frail. The smoking area outside your local hospital is a good place to find an entry level opponent.

“Eight minutes of intense fighting burns off the same calories as an hour in the gym.”

The government recently announced £20m funding for the Get Britain Fighting campaign. A spokesman said: “It’s time to get off the sofa, go outside and bring it.”

Blair to donate everything he owns to Labour 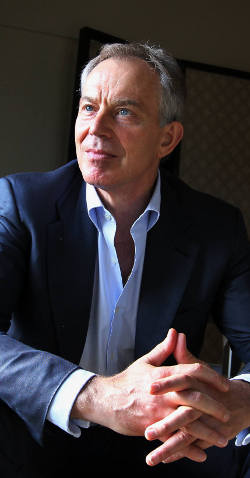 TONY Blair is to give all his material possessions to the Labour Party.

The Ex-PM will sign over his estimated £70m fortune, selling off his houses and even auctioning the contents of his wardrobe.

He will then return to his old Sedgefield constituency and live in a two bedroom council house with his family.

A spokesman for the Blair Foundation said: “For years, Tony hoped his assets would be seized  in a general workers’ uprising.

“Now he realises the only hope for the masses is a socialist after his own heart  Ed Miliband.

“There’s an image of Tony as a power whore who hijacked then ditched the Labour cause. But every evening he changes out of his blue suit into a collarless shirt, braces and hobnail boots as Cherie fetches him a mug of steaming tea.

“Then he sits reading The Ragged Trousered Philanthropists while listening to 70s cassette recordings of ballet from the Soviet Union.

Tony kept up the pretence that he’s a spineless, oleaginous trimmer so that the super-wealthy would let their guard down and reveal information vital to the cause.

“But these people make him sick to the pit of his stomach, as do canapes and rich food which he can’t hold physically hold down.

“At home the Blairs only eat boiled things.”