THE NHS is to ease the rules on liver transplants so that Britain will still have enough people.

Doctors have conceded the country is now mostly drunk and the priority is making sure Britain has a minimum number of bus drivers, engineers, firemen and doctors.

An NHS spokesman said: “Drunk people in their 20s and 30s can be productive as long as we can keep supplying them with a new liver every five to seven years.

“We are going to need lots of new livers, which means commandeering old people who have lived a clean life, or doing something unethical with pigs.” 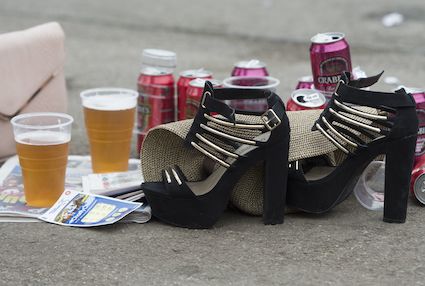 FOUR horses remain unaccounted for after the annual ritual of Aintree “Ladies’ Day”.

In familiar scenes, thousands of local women ran amok at the Liverpool racecourse resulting in the abduction of 15 horses and the destruction of more than half the Grand National fences.

Officials said most of the animals had now returned and the last of the women had been forcibly ejected from the premises.

A spokesman said: “They get drunk incredibly quickly and then they become very sentimental and get all worried about the horses.

“Some of them attack the fences, which they believe to be cruel, while others attempt to rescue the horses and take them to a place of safety.

“The women then get into a massive fight with each other before falling asleep. Meanwhile, the horses eventually make their way back to the course by themselves.”