The British Medical Association said excessive sun bed use and falling into drunken stupors by the pool in Magaluf had led to a 45% increase in girls looking like Oompa Loompas in high heels.

A spokesman said: "It starts out with first-degree burns and melanomas the size of walnut whips, but if it's not caught in time it can rapidly deteriorate into hair extensions, trashy tattoos and an addiction to footballer's cock."

Salons have been criticised for encouraging overtanning, with one Knutsford shop offering Britain's first 'Doner Tan'.

For £30 a session, customers are strapped to a revolving spit alongside a high-powered tanning bulb while a Bulgarian on minumun wage bastes them with peanut oil using a stirrup pump and a hose.

Meanwhile experts have dubbed the new phenomenon 'Binge-Tanning' in a bid to blame the trend on a complex mixture of conditioning and social pressure, rather than stupidity.

Psychologist Dr Nathan Muir said:  "By labelling this syndrome we can achieve not only expensive therapy sessions but also a range of pointless self-help books."

A spokeswoman for the British Skin Foundation, said: "Tanned skin is in fashion at the moment so one can only hope in 10 year's time there's a fashion for having a face like a wicket-keeper's glove." 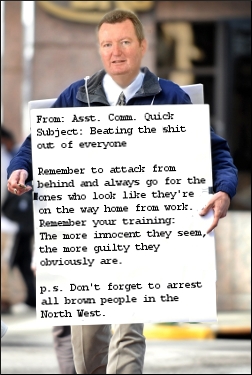 ONE of Britain's most senior police officers has resigned after accidentally revealing a secret plan to beat the hell out of you.

Assistant commissioner Bob Quick was forced to quit his job as head of counter-terrorism after wearing a sandwich board which outlined plans to attack you from behind and set about you with a nightstick for no particular reason.

The operation to hurt you very badly indeed has now been brought forward after Mr Quick was photographed with the plans as he arrived in Downing Street for a high-level briefing.

Amid frantic behind the scenes activity last night, the government issued an 'F-Notice', designed to alert the media that a senior security official has been identified as a 'fucknut'.

Home Office sources said the plan to beat seven shades of shit out of you is a downgraded version of an original plan to just shoot you in the face.

A senior official said: "We have to remember what our key objective is – using the broad palette of police brutality to keep you in a constant state of fear.

"Shooting someone in the face does look a tad pre-meditated. With random, indiscriminate assaults it's much easier to claim that an individual officer just got a bit 'carried away'."

Dr Tom Logan, a security analyst, said: "A society can survive when its police force is either violent or stupid, but you really can't do both at the same time."