LAH-DI-DAH ponces who talk all proper are about to find out what life is like in the real world now their fancy school has shut down, it was claimed last night.

As recession-hit fee-paying schools across the country close their doors, thousands of intelligent, sensitive boarders are about to come face to face with large, pasty-faced boys with glottal stops and attention deficit disorder.

Thugs in England and Wales are now cracking their knuckles in anticipation as debate rages over whether to strip Little Lord Fauntleroy and his chums from the waist up or the waist down, and exactly which obscenities to scrawl on their foreheads with an indelible marker pen.

Wayne Hayes, a 15 year-old bastard from Peterborough, said: "I hear they all wear top hats and carry teapots. If nothing else it at least gives me a choice of which one to shit in."

Roy Hobbs, a 17 year-old borderline psychopath from Swindon, added: "I'm going to ask one of them if they know the Queen and if they say yes I'll say 'Queen this!' and punch them in the kidneys. It's part of my A-level project."

But Professor Henry Brubaker, of the Institute for Studies, said: "The plight of fee-paying schools may provoke a degree of schadenfreude but let's not forget that it also means more children being educated by local authorities.

"While some may say this is a good thing, others – such as those with a decent education – may suggest that it's a complete and total fucking catastrophe."

He added: "In 30 years time we could be living in a society where nobody knows what schadenfreude means." 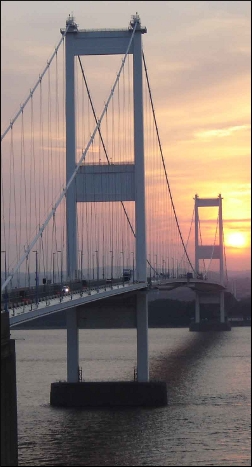 DOCTORS in Wales are being urged to treat depression with a strong dose of the Severn Bridge.

As South Wales topped the league for anti-depressant prescriptions, experts said the £5.40 toll was not only more effective but would ease financial pressure on the NHS.

A spokesman for the British Medical Association said: "A course of Seroxat is 50 or 60 quid, but for a fiver we can get them to South Gloucestershire where they'd at least have a chance, dammit."

He added: "And for those who get halfway across and then can't face going on or turning back, they can always just jump off. If they survive, the estuary tides will no doubt take them on a thrilling adventure."

Welsh GP Tom Booker said: "There are other ways to combat depression, but getting some fresh air would force you to look at more Wales, while exercise would involve being trapped in a room with dozens of sweaty Welsh people.

"A healthy diet helps, but around here that's like asking for a honey-roasted unicorn in a bap."

He added: "The Severn Bridge was supposed to alleviate the suffering of thousands of people in South Wales, but instead they all just stare at it, calling it 'Satan’s river-stick'. They even sing songs about it. It's hateful."

The treatment of depression in Wales has advanced in recent years, with courses of prescription drugs replacing the traditional method of being whacked over the head with a sock-full of foxglove by a half-pissed druid.