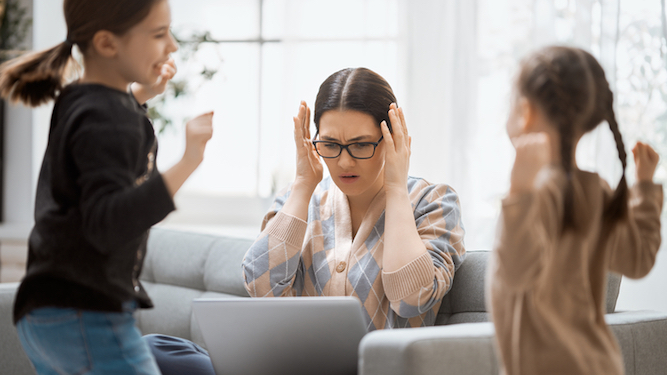 CHILDREN who have been at home for the past 12 weeks have sacked off schooling to concentrate on being a pain in the arse.

Subjects such as English and maths have been replaced with putting shoes down the toilet, shouting “I’m bored” and wrecking the house.

Mum-of-two Emma Bradford said: “It was all going so well at first. We’d be dressed by 9am, do a bit of PE, watch a BBC Bitesize and sit at the table drawing rainbows.

“But now it’s all gone to shit. Nobody is getting dressed at all and exercise is just the kids shouting ‘go f**k yourself’ at Joe Wicks.

“Honestly, I had no idea that my kids were such dicks. Someone put a cat turd in my shoe yesterday.

“I am seriously considering going out and licking stuff so I catch coronavirus and have to isolate from them.”

Bradford’s children Molly and Jack were unavailable for comment due to being busy making in-game purchases on her iPad.

SOME have claimed my recent appearances at Prime Minister’s Questions have been waffly and, er, hesitant. What utter rot. Here’s how I triumph every time.

Make it look like you’ve been, er, working flat out so, er, no time to comb your hair

If you’ve a habit of winging it and, er, getting away with it, and clearly just skimmed your notes 10 minutes before PMQs, muss up your hair to look like some mad dervish who can’t stop working. Makes the chap opposite with his Mr Whippy haircut look a bit of a fool, eh?

If the opposition haven’t got nice questions to ask, say nothing at all

Not literally nothing, obviously. Instead run down the clock with a load of, er, drivel. Try some platitudinous flannel about ‘world beating’, ‘magnificent effort’ or ‘pulling together’. And of course ‘black lives matter’, which they so truly do and I never said things like, er, ‘watermelon smiles’.

Throw in a few, er, swotty words you learned at, er, Eton

You, er, know the sort of thing. ‘Fustilian’, ‘tergiversation’, ‘integuments’, whatever the dickens they are. Or just use plenty of ‘ers’. I can easily fill at least 30 per cent of PMQs with blustering ‘ers’, which makes me look like a genius whose mind is racing so fast it’s hard to get his brilliant ideas out. At least that’s what I think it looks like.

This is the stuff! All pubs to open, er, this Saturday and all drinks are on the government. Er, vouchers! Available online or, er, something.