A NEW national lockdown is necessary to buy time to create a bold new set of excuses for the lockdown after that, the government has admitted.

He said: “There is no choice but to impose another lockdown, because… there was… a mutant… see, this is why we need it.

“We can only paper over the cracks with footage of 82-year-olds being vaccinated for so long, and incidentally there’s more of that today and we’ll be obsessively returning to it in every interview.

“Alas, the vaccine alone is not enough. Alas, mass immunity is still many months away. Alas, it is inevitable we will continue to cock up, so we need to bank some generic ‘alases’ in advance.

“So once again, we ask the British public to be patient. Your sacrifice will give us precious time to come up with an excuse that’s at least solid enough for the Daily Mail, and if that fails we’ll start the clapping again. Thank you.”

Boris Johnson's guide to acting the prick in serious situations 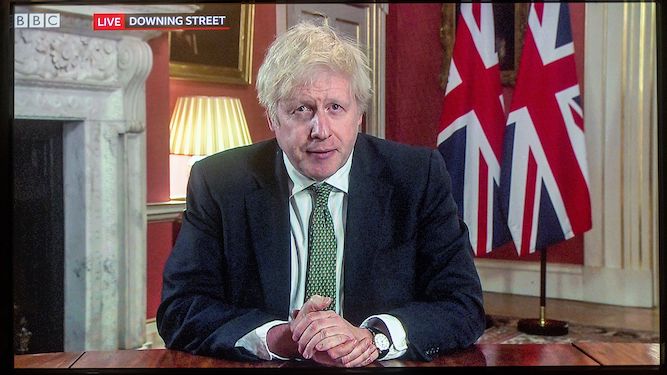 WISH you had a devil-may-care buccaneering attitude like myself, Alexander Boris de Pfeffel Johnson? Here’s how to behave inappropriately even when locking down Britain:

I’ve previously referred to ‘the bugle of the scientific cavalry’ and ‘vital arrows in our epidemiological quiver’, so last night I tried ‘we have a fair wind in our sails’. I’m hoping everyone thinks we’re going on an 18th-century nautical adventure, those ones where half the crew dies.

Muss up your hair again

Your hair, of course, should be roguishly unkempt. Nothing says ‘I’m taking this unprecedented public health crisis seriously’ like a 56-year-old man who’s more concerned with the lustre of the blonde covering up the pink bald patches.

Do a thing with your fists

As you may have noticed, I like to clench my hands in fists and do frustrated little gestures with them. It looks determined, it looks macho, and if you overdid it on the Chateau Lafite the night before, no one will notice your Frenchman’s shake.

Appear to be acting badly

Keep the audience guessing as to whether you’re sincere, trying so hard to sound sincere it comes across as false, or a sociopath putting on an act. Whichever is true, your overall performance should be so unconvincing people are reminded of Hollyoaks or Acorn Antiques.

Spin the facts till you’re dizzy

Last night I presented this utter shambles as a triumph for British vaccines, scientists and our wonderful NHS which we Tories have always backed to the hilt. It’s all nonsense, obviously, but a bit of wanking over the Union Jack worked at the last election.

Be calm, confident and friendly, oblivious to the impact your words are having. If there’s one thing guaranteed to prove you are treating Covid with utmost seriousness it’s treating it with the breezy disregard of Ted Bundy.