A DAILY Mail reader is unconvinced by the supposed benefits of drinking water in a heatwave.

Having learnt to distrust aspirin, salt, women and foreigners from his media outlet of choice, Roy Hobbs has now turned his scepticism towards staying hydrated in a heatwave.

Hobbs said: “Why should I drink water when my body is already 60 per cent water? I notice the so-called ‘experts’ haven’t got an answer to that perfectly valid question.

“We don’t even know where water comes from or if it gives you cancer. Nothing on the internet confirms this theory, which must mean there’s a big cover-up going on. The Met Office? Yet another institution captured by wokery.

“First the vaccine, and now the government’s urging us to drink water all day. Am I the only one seeing the pattern here? They’ve probably laced it with 5G or discovered that a quenched population is more likely to reverse Brexit.

“The water board’s saying this to boost their profits. They’ll have to get up earlier than that to trick me. I’m riding out this heatwave by sipping nothing but boiling mugs of Ovaltine to prove the snowflakes wrong.”

Coroner Martin Bishop said: “Roy was found hyperventilating this morning wearing a foil blanket over a puffa jacket. Cause of death: idiocy.”

Four possible prime minsters: how each of them would be shite 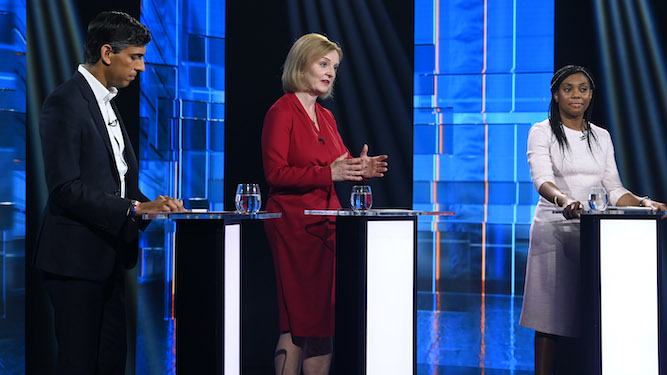 THERE are only four possible prime ministers left in the Conservative leadership contest. This is the dystopian nightmare Britain would be under each of them:

Free speech is compulsory. Every Briton must say whatever is on their mind at any given monent, no matter how prejudiced and vile. Anyone found keeping unpleasant thoughts to themselves is sent to Rwanda, as is anyone attacking the prime minister’s free speech by not watching her nightly broadcasts about how she flipped burgers for minimum wage in the summer of ’96. There are no economic policies.

SS Great Britain, as the country is now officially known, declares itself a pirate state. Eyepatched Penny, the captain of the country, assigns every man, woman and child a naval rank. Our economy is based solely on raiding France, Ireland, Spain and the east coast of the US. Rum, sodomy and the lash are our reward.

On her first day in Downing Street explains that her life and career are an ambitious performance art project and she will be exactly recreating the premiership of Margaret Thatcher, day-by-day, in every detail. Whole country ordered to join in. IT workers in former Yorkshire mining villages forced to join pickets by Met officers who then beat them. We re-take the Falklands from no-one.

Announces that country is from now on to be run by millionaires for millionaires because they’re simply better. Abolishes all taxes on all earnings over £1m, opens borders to anyone with over £1m in assets, and moves government to newly-created freeport so it is no longer bound by its own laws. Entire country becomes hive of luxury developments, Michelin-starred restaurants, private hospitals and public schools, with Britons no more than indentured slaves. It’s business as usual basically. Wins majority at next election.