A MAN has stopped working out after realising no-one gives a tuppenny toss about how long he spends at the gym.

Nathan Muir, from Bristol, made sure his Facebook friends knew when he ‘checked in’ to Virgin Active, but 24 hours later it became clear that absolutely no-one cared in the slightest.

He said: “It’s very strange because I even included hashtags of all the different squats I had been doing.

“And yet, complete silence.”

He added: “And when I went to the pub and told my fiends about my exercise regime, they all told me to ‘shut the fuck up, right now’ and then called me a ‘dreary ponce’.

“There’s really no point in continuing unless someone somewhere is impressed. Instead I shall take up sailing and tell all my Facebook friends about my weekend sailing adventures. 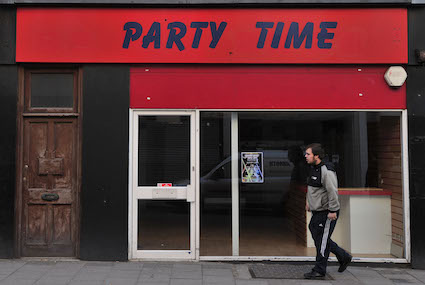 A COMMITTED Brexiter has yet to find a street party celebrating Britain’s very own independence day.

Joe Turner, from Stoke-on-Trent, who still asks strangers in pubs to explain to him why Nigel Farage is not prime minister, expected to open his front door and see trestle tables being set up but instead found it eerily quiet.

He said: “No bunting, no flags, no plates of sausage rolls. Nothing. It’s like the Diamond Jubilee all over again.

“I was already disappointed when I called the council and found there weren’t any Spitfire flypasts planned, apparently because of ‘lack of budget’ – Marxists – but I had faith in a spontaneous uprising of joy.

“This isn’t natural. I know everyone decent in the country is jubilant about Brexit from dawn until dusk, so there must be some kind of Remoaner Project Fear police keeping them inside.

“I’ll just drink a load of lager and stand in the street feeling really proud.”

Meanwhile, neighbour Martin Bishop said: “None of the churches are holding memorial services even though it’s the anniversary of the great disaster. I’m bereft.”