BRITAIN'S fat people are to be hounded into submission through a multi-million pound strategy of shouting and community violence.

At the heart of the programme will be 250,000 outreach counsellors who will patrol supermarket aisles looking for 'inappropriate choicemakers'.

Once they have identified a target the uniformed counsellors will approach the shopper and scream: "PUT IT DOWN FATTY! PUT IT DOWN!"

Supermarket entrances will be fitted with hidden scales and as overweight shoppers enter they will hear the sound of mooing cows and be handed a photograph of Christopher Biggins.

The counsellors will also have the power to force fat people to strip down to their underpants and run around the car park for 20 minutes.

The government's plan for 'healthy towns' will include daily calisthenics, with hundreds of uniformed citizens lined up in neat rows, swinging their arms in time to music.

The sessions will be filmed and shown before popular features at cinemas across the country. Actor Brian Cox will provide a voice-over stressing the importance of physical fitness to the struggle against international Zionism.

The 'healthy towns', or gesundestädte, will host weekly torchlit marches to the local sports stadium where the uniformed citizens will eat satsumas while watching Sir Steve Redgrave's 1996 coxless pairs triumph over and over again.

Anyone unable to lose weight will have their passport confiscated and be forced to sew a patch onto their uniform depicting a big, fat cartoon pig. 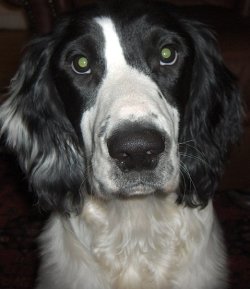 THE US Federal Reserve is to give everyone in America a spaniel in a bid to prevent recession in the world’s biggest economy.

It is the largest domestic pet the US central bank has given out, and almost ten times the size of the chinchilla issued to every household in the wake of the dotcom crash of March 2000.

Wayne Hayes, an analyst at Conceptomatix, welcomed the move to a spaniel-based economy, adding that the breed was one of the biggest single generators of additional spending, more costly even than a fat child.

He said: "Shoes, vomit remover, electric fencing, a cattle prod, two new sofas and a mobile phone. All those will have to be bought in the first two weeks."

He said: "The world has been brought to the brink of depression by a ridiculous consumer spending spree fuelled by cheap credit and home makeover shows. So let's keep it going."

Bernanke said the only way to prevent the current unsustainable consumer bubble from bursting was by slashing interest rates and creating another even bigger one for someone else to worry about after he had moved to Goldman Sachs.

Professor Henry Brubaker of the Institute for Studies said: "We conducted a detailed analysis of every major policy decision taken by every central banker in the world over the last 10 years and came to inescapable conclusion that they're a collection of fuckin' idiots."