THE department of health last night unveiled a non-emergency alternative to 999 for the thousands of people who call in everyday to say their leg feels funny.

The 111 number, chosen to match the numeracy level of its most likely users, will be manned by professional operatives who will use small words to explain why no-one is going to come to your house because your knee is making that weird clicky noise again.

Martin Bishop, an ambulance dispatcher from Knutsford, said: "It's very simple. If you're well enough to list your symptoms, you don't need an ambulance.

"Call back when you're unconscious, or can see a bright light at the end of a long tunnel."

Officials stress the 111 service is not designed to replace NHS Direct and its key function of keeping you on hold for an hour before telling you to go to your GP.

However the new service will offer a range of ringtones, hangover cures and will even advise on the nearest cock and fanny clinic to your postcode.

If successful, GP provision could be similarly overhauled, with surgeries replaced by a vending machine dispensing tamiflu, anti-depressants and contraceptive pills and a mechanical arm that pats patients on the head while saying 'there, there, that must be awful' in a soothingly robotic voice. 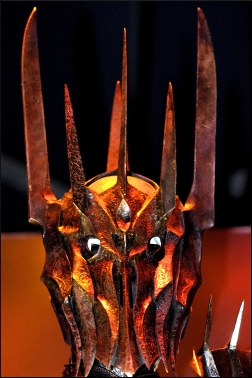 WHILE the world isn't looking, Sarah Palin has summoned an army of goblins, trolls and giant insects to her Alaskan fortress of evil.

The 'hockey mom' and mental witch queen is believed to be preparing for a climactic battle against all that is good in the world. Experts say she will ride into battle on a 50ft venomous centipede, wearing full body armour that emphasises her oddly alluring breasts, flanked by axe-wielding ogres.

Addressing the demonic horde from her obsidian balcony, she said: "Come forth warlocks, demons, balrogs, all gibbering creatures of the night. I beckon ye to do my bidding.

"Soon the Earth shall be plunged into eternal darkness, and humanity's cries of suffering shall echo throughout the unheeding universe. Yessireebob."

She concluded by promising the assembled horde that once the planet was transformed into the domain of unbridled evil she would reward them all with 'a mighty fine clam bake'.

Her husband, Tom Palin, the self-styled 'first dude of Alaska' has transformed into a hovering abomination that resembles a giant owl pellet covered in acid-spitting anuses, while her children have become giant child-faced spiders.

Palin's neighbour, electrician Tony Bryson, expressed concern at the events: "She always used to say she'd rule the world someday, but we thought that wasn't really something you got to do if you were a total idiot.

"But when a legion of giant scarab beetles crashed through my fence on the way to the Palin house, I thought 'Jesus, she's a trier'."

He added: "She sure is one pure crazy bitch. That said, I would quite like to have sex with her."