THE National Health service is to step-up its drive to encourage home births with the introduction of more than 300 Vietnam-style delivery ponds.

Officials say the move will increase efficiencies without any health risks, stressing a 21st century British hospital, teeming with MRSA and violent drug addicts, is every bit as safe as a dung-strewn farm.

From next January NHS trusts will be assigned 50 acres of local swamp where screaming mothers can heave their newborns into the world before chewing through the umbilical cord in line with best practice.

The strategy is a u-turn for the NHS which had previously dismissed home birthing as the self-indulgent preserve of mung bean-sucking hippies with fewer nerve-endings than brain cells.

An NHS spokesman said: "Research from China and Vietnam has shown that home childbirth is roughly as painful as stepping on an upturned electrical plug.

"Many work camps across East Asia now have vast delivery pens next to the canteen. And let's be honest, the world's not exactly short of Chinamen."

The cash-strapped government believes the initiative could save billions of pounds in maternity payments by classing childbirth as the sick-leave equivalent of a two-day bout of gastric flu.

The spokesman added: "We have looked at a range of international studies, including the latest one from Holland, which found that that home births are both safe and hygenic. Although of course there is no Dutch equivalent of Carlisle." 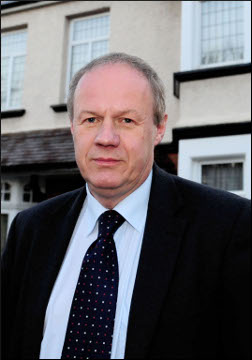 MINSTERS made up a load of lies to try and get Tory frontbencher Damian Green arrested, it has been claimed.

In a report filled with invisible apostrophes, a committee of MPs accused 'senior civil servants' of 'exaggerating' the 'threat' to 'national security' from leaks of secret Home Office documents.

But the MPs' report, released today, said that 'frustration' by 'officials' may have led them to give an 'exaggerated impression' of the 'threat'.

It added that it was 'unhelpful' to give the police the 'impression' the Home Office leaks had already caused 'considerable damage' to 'national security'.

Political translator Dr Tom Logan, of Reading University, said: "A lot of these reports can be quite tricky to decipher because it's not always obvious where the invisible apostrophes are supposed to go, but this one is fairly straightforward.

"For instance, this first paragraph basically says, 'Sheer desperation and wickedness by the Labour Party led them to pressure civil servants into making up some bullshit in a bid to make the Tories look soft on national security'.

"It then goes on to say, 'We can't prove it, but we know what you did, you lying sacks of shit. You made a total arse of this and you better just hope that everyone keeps their fucking mouths shut'."