NHS told to stop splashing out on fancy operations

THE NHS must stop frittering money on fancy operations with all the latest equipment and drugs, ministers have claimed.

The government believes the NHS overspending was the result of patients and doctors wanting flashy operations just to show off.

Health secretary Jeremy Hunt said: “We need to end the culture of people thinking they can go along to the NHS and have a massive operation just to impress the neighbours.

“Doctors are often to blame because they’re posh show-offs. Patients probably turn up with a sprained ankle and the doctors persuade them to have brain surgery to prove how clever they are.

“People should ask for their operation to be as inexpensive as possible. Do you really need a highly paid anaesthetist giving you morphine when you could just bite on a stick?

“And is it too much for people to bring their own kidneys and other organs for transplants? They’re only a couple of quid at Asda.”

Patient Roy Hobbs said: “The hospital staff were brilliant when I broke my knee, but it would have been nice if they hadn’t amputated my leg and replaced it with a plank and an old shoe.” 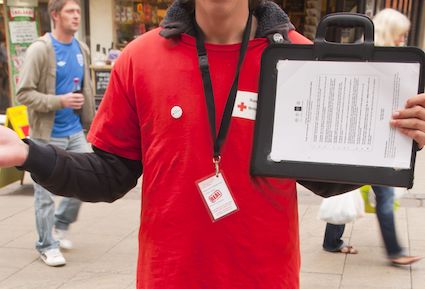 THE numbers of incredibly irritating people who are prepared to be ‘chuggers’ is dangerously low, charities have warned.

Naturally annoying people are favoured by charities as they are the only individuals willing to engage strangers in lengthy, trite conversations and then ask them for their bank details.

Charity spokesperson Francesca Johnson said: “We’ve had to exploit groups that are already innately infuriating. Younger people are always a bit dickish, and students are particularly tiresome, so they have been an excellent source for us.

“We also like failed stage actors who are seething with resentment, as they’re particularly good at passive-aggressive emotional blackmail.”

She added: “We don’t know what will happen if we have to rely on people giving to charity because they want to rather than because they’ve been guilt-tripped by a horribly jovial twat.”