No way tobacco product might turn out to be harmful

‘HARMLESS’ tobacco products are never revealed to be bad for users, according to electronic cigarette makers.

Roy Hobbs, CEO of Vape-master said: “If you look back at history, there is no precedent of a similar product being considered initially harmless – and even widely advertised as having health benefits – until people started dying.

“At least, not that I can think of.

“Nothing could be more natural that deeply inhaling large volumes of heavy, chemical-infused mist on a daily basis.

“It’s what lungs were made for.” 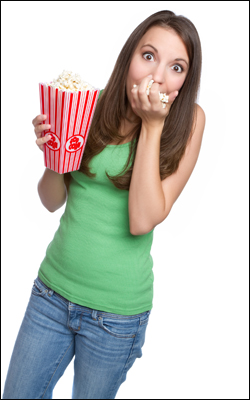 THE UK is the latest target of international con-artists attempting to sell popcorn that tastes of chilli and pepper.

Savoury popcorn was initially targeted at sophisticates able to choke down anything but is increasingly consumed by ordinary people disorientated by a decade of Heston Blumenthal.

Stephen Malley of Bath said: “I bought sour cream and jalapeno popcorn to impress a woman.

She acted like I was special for buying it, I acted like she was in my special club for eating it, we slept together mainly to get the taste out of our mouths, and now I have to buy some more.

Web designer Eleanor Shaw said: I look back at that time when I bought popcorn flavoured with Worcester sauce and Key lime as a period of temporary insanity, such as serial killers experience.

I cant explain why I did it. But I have dedicated my life to making sure it never happens again.

Thats why I created the website  savourypopcorntasteslikeshit.com which currently gets 400,000 views a day. Mostly from people typing in the search string savoury popcorn tastes like shit.