A SATAN-worshipping nurse is facing the sack after summoning flesh-eating homunculi during working hours.

Jackie Simpson, a senior staff nurse at Doncaster Royal Infirmary, has defended her actions insisting she is a diligent professional whose work is not affected by her devotion to the Lord of the Flies and his horde of pus-filled abominations.

She said: "On the day in question we were short-staffed due to a rota cock-up, so I decided the only way to get the beds made was to create two magical mini-men out of goat's blood and saltpetre.

"I then recited a spell from my goatskin-bound grimoire which animated their misshapen forms, leaving them perfectly prepared to do the NHS's bidding.

"The resulting homunculi were extremely efficient, cheerful and allowed us to get the rounds done in time for visiting hours."

However management took exception when one of the homunculi, named Metanqua, was found feeding on a recently-deceased patient.

Simpson said: "'The ward sister asked if Metanqua and the other homunculous, Korazon, could stay and do a double shift as there still wasn't any money to pay nurses and I said yes, but they would need some human flesh as sustenance.

"She said that was fine as there was an MRSA victim with no relatives about to be incinerated, they could have a bit of her. But when senior management found out, all hell broke loose, metaphorically speaking.

She added: "If you ask me, it's all about politics." 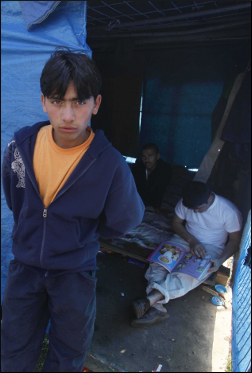 AFGHAN refugees camped on the outskirts of Calais were today being urged to explain why they want to live in a country where people complain about the quality of the judges on a celebrity dancing show.

As French police closed down the 'Jungle' refugee camp, officials at the UK Border Agency warned the asylum seekers they would be arriving right in the middle of one of the worst Strictly Come Dancing-based rows this year.

A spokesman said: "Afghanistan is a vile place run by corrupt politicians, with a worthless currency and where nothing works.

"So the only real difference between there and here is that they're caught up in a never-ending tribal war and we're phoning the BBC to complain about Alesha Dixon. I swear to God, I honestly don't know which is worse."

Khalid Harzai, a 25 year-old engineer from Kandahar who arrived in Calais last month, said: "The conditions here are not good but at least they are not as bad as Alesha Dixon, who is totally out of her depth."

Meanwhile psychologist Dr Bill McKay said the intensity of the latest Strictly Come Dancing war suggests Britain is now clinging to its collective sanity like Leonardo DiCaprio hanging on to that plank at the end of Titanic.

He added: "I have urged many of my patients to stop watching television and perhaps read a book, but of course I may as well be asking them to sculpt a replica of the Coliseum out of corned beef."

Television viewer Nikki Hollis said: "Danni Minogue and Alesha Dixon are terrible judges. That Adrian Chiles is on telly too much and I think Justin Lee Collins is hysterical."

She added: "I'm allowed to vote in general elections and stuff."