Unease as Jamie Oliver becomes most sensible person in country

BRITAIN was today coming to terms with the possibility that Jamie Oliver is the only person currently making any sense.

As MPs indulged in a made-up argument about Europe and Mervyn King threw your money in a bin, Oliver once again chastised the government for not feeding children properly and, to the deep unease of everyone in the country, backed his argument with science.

Slamming about 22 kilograms worth of research on the table, the celebrity chef said that well-nourished children concentrate better and are healthier, while millions of worried people tried their best not to admit he was obviously correct.

Oliver, who now also writes a column for the Daily Mail, then pointed out that if children eat some vegetables at lunchtime they might not need a gastric band and a truck full of diabetes medicine by the time they turn 30.

Roy Hobbs, a father of three from Hatfield, said: “I like Jamie Oliver’s recipes but I simply cannot deal with him being our most sensible human.

A petition has now been launched on the Downing Street website calling for absolutely anyone else to think about a serious issue and try and do something about it as quickly as possible.

Helen Archer, a mother of two from Stevenage, added: “My fat kids are full of sugar and really, really stupid.

“They have the attention span of… I see that that girl from ‘Downton’ has been mouthing off about good manners. 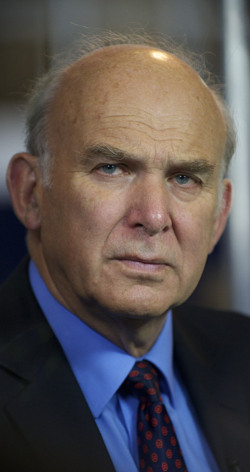 A RECORD number of Tory MPs last night said the Lib Dems are a bunch of homos.

David Cameron faced the biggest rebellion of his premiership as more than 80 of his backbenchers voted for a motion which said Vince Cable wears lipstick and dances around in frilly underpants.

Sir Denys Finch-Hatton, MP for Worthing East, said: “He tried to touch my bum. I fought him off but he had this wild look in his eye that seemed to say, ‘I will take you, roughly’.

“I am not a homophobe, I just don’t want some Lib Dem fancy boy peering at my John Thomas every time I go for a tinkle.”

Martin Bishop, who earlier resigned as Theresa May’s unpaid cupholder, said: “Lib Dems do not share my British values. They like being with naked men.

“That’s fine, but they have no right to drug me, bungle me into the back of their van and then make me do weird, mucky things while they video it and then threaten to put it on YouTube.

“We need to repatriate our democracy from these deviants, perhaps through some sort of national voting thing.”

Polls say more than 40% of Britons back the rebels, with many claiming a Lib Dem comes round their house once a week and asks if he can sort their cucumbers.

Margaret Gerving, a retired headmistress from Guildford, said: “He stood there in my kitchen saying ‘this cucumber is too wide’ and then he licked his lips. I fainted dead away.

“And he’s always asking to borrow money. But I keep telling him, ‘you think you’re bad with money, you should see my overdraft’.