Vegans still claiming they have their own cheese

VEGANS have repeated their claim that they have their own type of cheese.

Despite being told they are demonstrably wrong, the vegans keep saying it, as if somehow that could eventually make it true.

Vegan Tom Booker said: “When I first went vegan, I was excited to tell all my non-vegan friends about how I was saving the world, and how they were all basically Nazis.

“But I was also quite sad about pizza.

“I needn’t have worried, because we have our own vegan cheese, and it tastes exactly the same as planet-destroying cow cheese, but without the aftertaste of murder. You can barely even tell that it’s made from nuts.”

He added: “We also have our own nut milk.”

Booker’s girlfriend, Emma Bradshaw, said: “It’s great that Tom’s so involved in some fucking cause. But it’s not cheese, it’s a rubbery, beige delusion.” 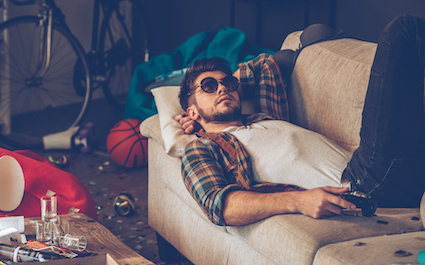 AN ingenious graduate has hatched a plan to avoid repaying his student loan by never earning a decent wage.

Tom Logan, 21, has announced his cunning scheme to earn less than £18,000 for every year of his life, keeping him out of reach of the tentacles of the Student Loans Company.

He said: “I’ve done it. I’ve beaten the system.

“The suckers at the Student Loan Company have lent me a cool £50,000, but I’ll make sure that’s the last time I’ll ever have that kind of scratch.

“All I have to do is stay in dead-end jobs, being careful never to let any one of them turn into a career and never move out of rented accommodation, and it’s easy street for life.

“Joke’s on you, big finance. You’ve been outsmarted. Shouldn’t have messed with the cream of the intellectual crop.”

Friend Emma Bradford said: “He’s got a philosophy degree, so this would have happened anyway.”