Would You Like To See Our Balls? Ask Jamaicans

THE men of Jamaica last night offered to show the world their incredibly healthy balls.

As researchers linked long-term marijuana use to testicular cancer the Caribbean island's male population said anyone who doubted the vigour of their balls should board a plane to Kingston immediately and cup them.

Sir Denys Finch-Hatton, the governor general, said even the briefest of cupping sessions would confirm the rude health of the nation's testicles.

He added: "Of course no-one round here can do a day's work and the transport system is little more than an elaborate hoax, but my God, the balls.

"Firm, flawless, magnificent. In fact, if you're ever listening to UB40 and you hear an instrument that sounds like the bongos, it's actually a Jamaican man playing his own nuts."

Winston Golding, an occasional fisherman from Trenchtown, said he had smoked the ganja all his adult life with no detrimnetal effects on his stupendous gonads.

He added: "Mr Scientist, if ya be thinkin' me balls are so diseased then why don't ya and Mrs Scientist come to Jamaica and have a closer look?

"But I tell you now, once ya missus get a sight o' me glorious knackers, ya be phonin' the airline tryin' to get a refund on her return ticket." 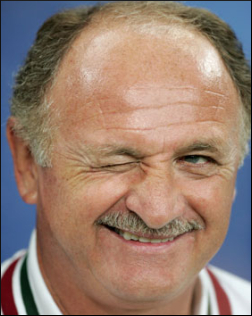 Following his dismissal by Chelsea, Scolari stressed that while his former rivals were getting up and going to work every day, he would walk away with enough money to build his own pirate ship.

He said: "Winning football matches when you have 11 Brazilians in your team is not particularly difficult. My main task was ensuring the bus driver knew the way to the stadium.

"The tactical genius was parlaying that skill as a bus driver's assistant into a win or lose contract worth £15 million.

"Pro-rata that's more than Paul McCartney. I'm not quite up there with Tom Cruise, but there's always the Arab chap at Man City."

Scolari said he would use some of the money to fulfill his long-held fantasy of pretending to be Gene Hackman for a day.

He added: "I will spend the morning dressed as Lex Luthor, firing a missile at the San Andreas fault while shouting 'Miss Tessmacher!' every five minutes.

"And in the afternoon I will command a submarine and attempt to start World War III until Denzel Washington locks me in the toilet. I'm really looking forward to it."

An Old Trafford spokesman said: "Chelsea have got to sort themselves out or he's going to end up with a hernia the size of a peach."