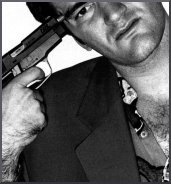 I read an article in Time magazine about a year ago and apparently, okay, and this is no fucking bullshit – it's a fact that all women, and when I say all women – I'm talking Madonna, the woman who works in the 7/11 down the road, every woman who ever appeared in a Russ Meyer movie, those women you see carrying big jugs of water on their heads in Africa – okay, so you get the picture, we're talking all women okay – would rather listen to Johnny Cash Live at San Quentin than have oral sex with their husband. Fact.

When I saw this I thought 'Oh my God!' – it was a real lightbulb moment, so I immediately called Harvey Weinstein and told him I was going to make a movie called MaimTrain, which has absolutely nothing to do with women listening to classic Johnny Cash instead of giving their partners blow jobs. No, because this was going to be a three-and-half-hour movie set in real-time – like High Noon directed by Fred Zinnemann – about this real nutjob psycho called Dangerous Dick who works his way up and down the carriages of a midnight train, maiming people using a cheese grater and a nail gun. In a technique which has never been used before, I'm going to take the entire soundtrack of another movie – Those Magnificent Men In Their Flying Machines to be precise – and simply play it over MaimTrain. Pretty neat, huh?

I’ve been credited with kick-starting various actor's careers over the years, and with this new project I wanted to pluck a struggling artist from the depths of despair – I needed to find that someone who was going to step up to the plate like John Travolta in Pulp Fiction. To cut a long story short, the solution to my casting problem came to me whilst I was having a conversation about early 1980s amputee martial arts movies with Chris Walken over brunch at the Ivy. Wham! It hits me between the yes – the role of Dangerous Dick was made for Richard O'Sullivan, a British guy I saw in this awesome sitcom called Man About The Nest, a few years ago whilst I was in London. I rose to my feet and punched the air with delight. Chris Walken, meanwhile, looked me in the eye and called me a 'dumb asshole' before picking up the tab and leaving. But hey, I knew he was kidding me. "This movie was gonna make Richard O'Sullivan’s career explode like Ron Jeremy's cock in one of those neat money shots," was what I thought to myself…and then I wrote that one down on a napkin, because it seemed like a swell piece of naturalistic dialogue – not like all that contrived shit you hear in other movies.

I was halfway through watching my new Cannon DVD box set – you know, the awesome 70s TV detective series about a fat private detective who goes around solving shit – when I dropped the Hershey bar I was munching on and picked the phone up and called my pal Harvey Keitel. "Are you awake Harvey?" I barked excitedly down the phone. He replied, like real quick: "Of course I'm awake jackoff, I picked the fucking phone up, didn't I? Now what the fuck do you want, it's 2.30 in the morning here?" Okay, so we started talking and I told him that I’d been watching this Cannon DVD, and how, like totally awesome I thought the character was and what a great idea it'd be to make an ironic, revisionist, sort of…ahhh…updated three-and-a-half-hour version. "Fine, but what the fuck has that got to do with me?." Then I began to get excited. "Okay," I said to him, "this is the fuck it's got to do with you Harvey, imagine this, okay – you put on 250 pounds eating junk food over the next six months, and grow a moustache. No fat suit, none of that Eddie Murphy bullshit, and you – yes you Harvey will become the new Cannon. Bobby De Niro did it with Raging Bull, I know you can too."

Following a brief, mainly one-way discussion which consisted of him trying to convince me it might be a good idea if I were to stick a broom up my ass sideways, I put the phone down and resumed the Cannon-fest. Like, awesome.

London is one of my favourite cities in the whole world. Some of my all-time favourite movies were made here: Brannigan, Sweeney and of course, Sweeney II. During my short stay in England promoting MaimTrain I had this unbelievably brilliant idea for a movie. I was in my hotel room, it must have been early evening around 3.30am – I was watching a repeat of Roots on cable, when it came to me in like a flash – pow ! So I immediately called up Sam Jackson and told him of my vision. "Hey Sam," I screamed down the phone. "What the fuck do you want – I'm busy?" he replied. "Never mind that shit!" I yelled back. "Check this out for a great idea. Think Roots, okay, the Alex Haley TV blockbuster from the 70’s, except all you black guys learn kung-fu from the Chinese who are building the railroad around about that time – and zowee! – you guys kick the living shit out of the Chuck Connors character, and all the rest of those racist fucks and start bossing them around and shit. It'll be a like, post-modern, turn-the-tables piece. Hey – we'll get Isaac Hayes in to play Chicken George, put some weird eclectic shit on the soundtrack, and we're in business. It's like, it can’t fail."

He started to get real interested, but eventually had to pass when I told him I had Chris Rock down to play Kunte Kinte.