CHILDREN should just shut it and do as they are told for once in their fucking lives, according to the results of a major academic study.

Researchers at Glasgow Clyde University found that instead of being treated like equals and asked for their opinion on a wide range of issues, children should button their fucking lips and remember who pays the sodding bills round here.

Professor Henry Brubaker said: "There has been a move in recent years to include children in decision making and respect their opinions. Why? They're idiots.

"Even doctors are now being told to take children seriously. So when some moronic little turd comes in with a 50p piece rammed up his nose, the GP is supposed to chat to him about interest rates? Give me a fucking break.

"We studied 50 children over a two-week period and concluded that rather than indulging these ghastly, violent, cheeky little shits, perhaps we should concentrate on feeding them three times a day and making sure they do outlandish things like their homework, brushing their teeth and going to bed at a reasonable hour. All the while telling them to sit down and shut the fuck up on a regular basis."

He added: "Once you've established a pattern you can then carry on doing that right up to the point where they find a job and get the fuck out of my house."

But Kyle Stephenson, 12, a spokesman for the British Youth Parliament, said: "Children have a right to be heard. In fact, I have just finished writing a really important thing about the environment.

"The Prime Minister has asked me to start work at the Number 10 Policy Unit as soon as my balls drop."

All ITV Shows To Be Based On Google Search Terms 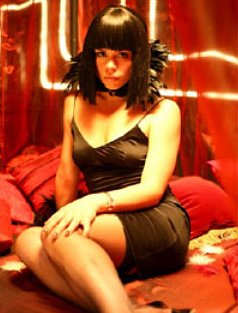 ALL future ITV shows are to be based on popular Google search terms following the huge success of last night’s new primetime drama Billie Piper Dressed as a Whore.

Alan Whicker will present the new travel series A Man with Two Cocks, while Clive Owen will take the lead role in the four part action series Cheap Car Insurance.

Michael Grade, ITV chairman, said the new schedule demonstrated ITV’s firm commitment to giving the viewers exactly what they wanted, particularly if that was an hour a night, five days of week of Richard Madeley being hit on the head with a brick. “It’s what we call appointment to view television,” he said.

“The whole idea came to me one night when I was cleaning my computer keyboard after a few hours on the internet. Suddenly I realised that Google search revealed our innermost thoughts and desires. I went straight back into the office the next day and commissioned Filthy Sex Nude Girls, and the first one goes out on Saturday at tea-time,” he added.

Meanwhile Emmerdale is to be renamed Lesbian Shower Fun while The Bill will be called Organic Box Delivery. Michael Parkinson will continue to present Toss Wank Fuck Knob on Saturday nights.

Wayne Hayes, professor of broadcasting studies at Dundee University, said: “ITV has shifted its focus from fleecing drunken morons with rigged phone quizzes to appealing to sex crazed loners and depraved lunatics with utter filth. It makes a lot of sense.”