NINE out of ten holiday photos will be ruined by some fat-headed arsewit wandering into the frame, it has been confirmed.

Research has shown that the majority of photographs, whether of picturesque ruins, gorgeous sunsets or simply families at play, also included some nonplussed knobhead carrying a beach ball.

Photographer Tom Logan said: “On a busy Algrave beach you can understand why every picture is dominated by total strangers pulling their trunks out of their bumcracks, but it’s not just there.

“I’ve got pictures of Machu Picchu featuring some twat in a baseball cap, haunting shots of Angkor Wat where the only thing you notice is the obese dickhead with a plastic 7-11 bag, and images of the South Georgia glaciers complete with a slack-jawed wankstain being surprised at a penguin.

“I had a lovely time in Reykjavik recently, but when I scanned through several hundred images all I saw were fat-headed cretins gawping at the camera as if they’d never seen one before.

“You’d think it was the fucknut capital of the world. Which it isn’t, it’s really beautiful.” 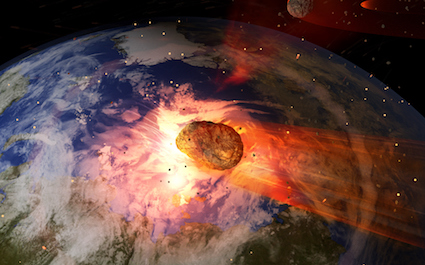 Truss told the business community and the media that they need to be more positive about the coming asteroid, which will replace the capital with an 180-mile diameter crater.

She continued: “Day after day I see the same moaning faces.

“‘What’s the point in investing in developments that will be atomised in less than two years, Mrs Truss?’ ‘Won’t this badly affect Britain’s standing in the international community, Mrs Truss?’ ‘Can the meteor not be stopped, Mrs Truss?’

“And the BBC, my lord. If I see one more report that begins ‘Despite the meteor, it may be possible for small communities in the Outer Hebrides to survive,’ I swear I’ll write a letter.

“What about looking at the upside? What about the expected boom in traditional hunter-gatherer businesses? What about world-leading low-carbon economy we’ll achieve at a stroke?

“This asteroid has chosen to hit Britain. Not France, America or China. Britain. Is it only me who sees that as an extraordinary privilege? Is it just me who cannot wait?”