A guide to the Trump presidency of 2019

DONALD Trump will begin 2019 as president of the United States of America. But will he finish the year that way, and will the USA survive? Find out:

Trump and his bizarre family celebrate New Year’s Eve in their stylishly excessive way by shooting a sacred white buffalo in the 57th-storey piano room of Trump Tower.

Trump gives press conference querying whether the internet is working because Kanye West has neither liked nor retweeted any of his tweets for months.

Arrested and charged with more than 177 offences, including the newly-coined crime of megatreason, a bewildered Trump asks how Hillary Clinton has got away with this.

Taking the stand for the first time, Trump offers to provide incriminating testimony against his colleagues, his family, his wife and his mentor, Vladimir Putin.

Anyone and everyone ever connected with Donald Trump, including Nigel Farage, Piers Morgan and Macauley Culkin, is arrested. ‘I am the only innocent man in America,’ Trump claims.

Forced to swear on a bible, Melania Trump dissolves into more than a thousand venomous snakes. Fox News admires their natural beauty and grace.

President Mike Pence announces the conversion of everyone in the United States, and Israel, to Christianity. Deposed next day when his torrid affair with Arlene Foster revealed.

Representing himself, Trump tells trial judge ‘You’re fired’. Is told ‘This is not The Apprentice.’ Says ‘You’re fired!’ again.

Found guilty on all charges, Trump sentenced to live in a magnetic cell orbiting the Earth.

The most influential bellends of 2018 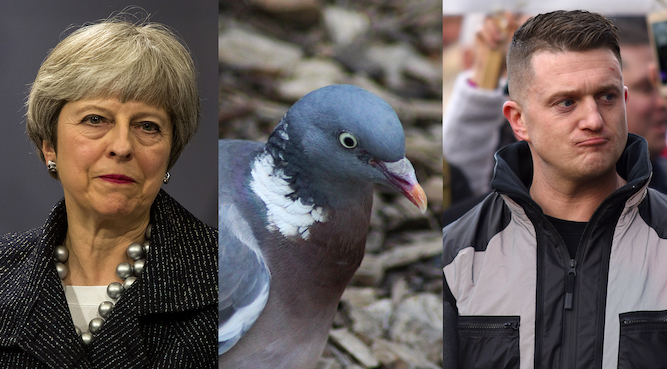 HERE’S the rundown of 2018’s prize bellends – plus a few that may surprise you.

Theresa May
In 2018 Theresa’s grim determination to hang on in there has been an inspiration to unwelcome guests, stubborn stains and unflushable turds everywhere.

Pigeons
Always the twats of the avian community, in 2018 pigeons were up to their usual tricks such as shitting everywhere and striding around your garden like the puffed-up, pompous little bastards they are.

Donald Trump
An obvious but necessary inclusion in the list. The big question is what nonsense will pop into his head in 2019. Rumour has it his CIA bodyguards prevent him from watching The Handmaid’s Tale in case it gives him ideas.

Elon Musk
Musk’s ‘paedo’ comments confirmed he is not a genius-level polymath, just a self-promoting nerd who got rich from something quite dull, in this case PayPal, with an unoriginal interest in space travel. (See also: Branson, Richard.)

Your Brexit uncle
2018 was a great year for your Brexit uncle, who still has zero factual knowledge of what the EU is. His current obsessions are ‘WTO rules’ and the ‘gilets jaunes’. He doesn’t understand either, but does like bad things happening to the French.

Han Solo
The young Han Solo, it turns out, is pretty bland and got his name from an Imperial HR guy, another important step in the franchise’s baffling quest to ruin every original character.

Daily Mail commenters
Despite the loss of nutter-in-chief Paul Dacre, Daily Mail commenters have not given up posting hate-filled opinions based on their childlike understanding of the world. Do you feel Britain would benefit if we hanged all students? There will always be a Mail reader who agrees with you.