THE USA was so unready to have a woman as president that it would vote for literally anyone else instead, it has been confirmed.

Following Hillary Clinton’s defeat by a man who has never worked in politics and has no interest in doing so, the glass ceiling has been reinforced with toughened shatterproof safety glass.

Wayne Hayes of Jasper, Indiana said: “Boy, were we not ready for a woman president. Not this century.

“Commentators were all ‘well we had a black man as president’, but didn’t reckon the most important word there was ‘man’.

“Women can’t be trusted. They’re emotional, they think clothes are important, and might try to get revenge for the last 6,000 years.

“I believe President Trump should pass a constitutional amendment to make sure no woman embarrasses herself like this ever again. It’d be fairer.” 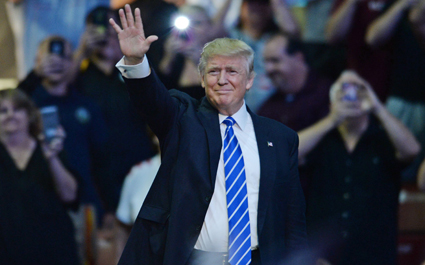 A SMILING president-elect Donald Trump has instructed aides to ‘get them’.

The 45th president of the United States grinned and waved at cheering supporters as he whispered the simple instruction into a henchman’s ear.

An onlooker said: “It wasn’t clear who ‘they’ are but I think we can assume it’s people with whom Donald is not on the best of terms, or whose features are not ideally suited to modern America.

“And it’s too early to say why they were being ‘got’. Perhaps they were being taken to a nice celebration party with free massive cookies for all, or maybe something a tad more sinister.

“I think he also mentioned ‘get the witch first’ but it was hard to hear over all the cheering.

“These really are interesting times.”