America to send monkey-riding-a-dog into space

THE US is to send a monkey strapped to a dog on a space mission, it has emerged.

Following Iran’s claims to have sent a monkey into orbit, president Obama said he is determined that the US leads the world in entertaining, morally dubious animal space travel.

The monkey-on-dog astronaut team will consist of a three-year-old collie called Heston and Peanut, a Capuchin monkey wearing a cowboy hat and a leather jacket with the American flag on its back.

The duo will travel in a specially designed rocket with the control room and feeding area connected by an assault course featuring jumps, tunnels and a little castle with a moat.

A NASA spokesman said: “There’s not much point in having a monkey on a dog unless you get them to run around a bit.

“Also this is important research into how zero gravity affects a collie’s ability to complete a mini-equestrian course with a monkey dressed as a cowboy on its back.”

However animal rights campaigners have responded angrily to the project, producing a list of 498 ways in which it is against nature.

American Tom Booker said: “My worry is that Iran will retaliate with something even more spectacular, for example a spaceship containing a really good flea circus with a gecko ringmaster.

“With the economy being how it is, I’m not sure we should risk an increasingly flamboyant novelty-based animal space race.”

Most Britons believe meerkats can talk 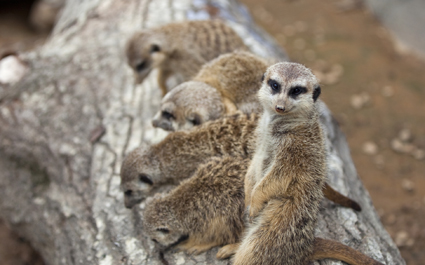 64% of Britons believe meerkats actually do speak English with a funny accent.

The majority of the UK population thinks that the Compare The Market adverts are made by pointing cameras at animals.

Father-of-two Roy Hobbs said: “I can’t believe they’re going to axe the meerkats. I mean, it’s not like they can be returned to the wild now because they’re used to celebrity lifestyles.

“They should go to a special zoo where they could have an enclosure with a library.”