The UN envoy became increasingly agitated during yesterday’s meeting with the Syrian leader, grimacing and tugging his sleeves as the dictator repeatedly denied responsibility for his army’s actions, blaming civilian deaths on terrorists, faulty bombs or possibly mass spontaneous combustion.

After listening to nearly two hours of the Syrian leader’s flimsy self-justification, Annan muttered darkly and stood, removing his jacket and calmly handing it to an aide. He then punched Assad square in the face, sending him over the back of a chair.

Annan said: “Diplomacy, not violence, is the answer and I deeply regret my actions. However I must admit it felt good. Really good.

A UN spokesman said: “Despite Kofi’s calm, almost Zen-like exterior, he’s pretty tasty with his fists when he gets riled up.

“And while this hasn’t exactly helped the situation, Assad is an absolute top flight bell-end.

“Even putting aside the all the brutal oppression and other more worthwhile reasons to detest him, he looks disconcertingly like a 70s catalogue model but with a tiny face that could fit on a 10p.

“Plus he writes his wife emotionally-incontinent emails in the style of a teenage bedwetter while listening to Right Said Fred and poppy middle-of-the road country music.

“Incidentally, just having an iTunes account doesn’t make you human and ‘relatable’. You can have a credit card and still be an oozing black miasma of wickedness.” 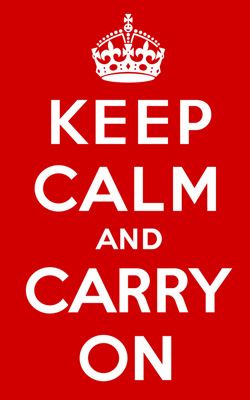 THE current glut of ‘morale-boosting’ posters and tat is having the opposite-to-intended effect, it has emerged.

Researchers have found that posters and crud inspired by the WW2 government poster ‘Keep Calm and Carry On’  are not creating an atmosphere of upbeat stoicism.

Professor Henry Brubaker of the Institute for Studies said: “The poster is actually more likely to inspire exasperation, boredom and a sense of living in a hopelessly empty world where nothing means anything any more and all human experience has been reduced to the purchase of trivial nostalgic shite from shops playing Groove Armada CDs.

“This type of poster was originally produced during wartime, but had limited distribution because people generally dislike being patronised by inane drivel when they’re having bombs rained on them.

“Just look at it. Why? Why would you like that? Why would you want to pluck it from the bottom of history’s litter tray and then contrive billions of unamusing variations involving cups of tea and cupcakes?

“At best it has no amusement value. At worst it is a sad reminder that Britain is no longer a nation of indomitable tea-drinking eccentrics but a homogenised, coffee-fuelled pit of brawling, self-serving corporate drones.

“Everyone in the office disagrees with me and says I am being miserable but fuck them, they are morons.”

However the ‘Keep Calm…’ phenomenon may soon expire as the crud industry rapidly exhausts every possible variation on the phrase.

Retro-themed shite monger Nikki Hollis said: “This has been a fabulous cash cow but we’ve simply run out of things one can do while keeping calm.

“Our designers’ suggestions have become increasingly bizarre – ‘Keep calm and repeatedly bang your erection against a window while screaming’, ‘Keep calm or we will smell your fear’, ‘Keep calm and watch your neigbour in the bath’, that sort of thing.