'I'll give you my pasty when you pry it from my cold, dead fingers' 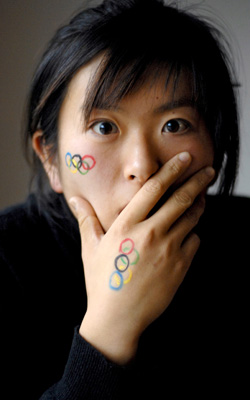 A 22-YEAR-OLD London man with an unauthorised tattoo of the Olympic rings has received a gruesome public punishment.

The Trafalgar Square flaying, Britains first since 1586, was attended by a crowd of thousands. Millions more watched on webcam and cheered wildly as Tom Bookers neatly-removed skin was waved in the air by grinning Olympic henchmen.

Booker, who viewers at home could see screaming in close-up by pressing the red button, expired less than 20 minutes later.

Donna Ryan, UK marketing director of London 2012, told worldwide audiences: So will all violators of copyright and trademark rightfully belonging to the London Organising Committee to the Olympic Games perish!

I am not without mercy, and shall have this mans skin made into a clutch bag and given to his pregnant wife as a constant reminder of his crime.

Prominent critics of London 2012 had their tongues crushed, while tens of thousands who dared to complain about the limited availability of tickets were granted clemency and exiled to the unpopulated wastes of mid-Wales.

Baron Sebastian Coe presided over the day, at one point turning his thumb downwards and condemning the owner of Hackneys Five Rings Kebab Shop to be torn apart by wild dogs.

He said: This will be an unforgettable summer, and if it is not I swear by Olympic partners Visa I will see the mighty Thames run crimson with Londons blood.