Women 'have best sex surveys in their 20s'

WOMEN enjoy the best sex surveys of their lives in their 20s, according to new research.

The survey challenges the findings of earlier sex surveys, which suggested that womens’ sex survey drive peaked in their 40s.

It also found that by their mid-30s, many women had lost interest in sex surveys altogether.

And its only normal that interest in sex surveys should wane as people come to realise they are just thinly veiled plugs for products aimed at women, usually tampons or sex toys.

The survey, commissioned by sex toy retailer LadyBliss, was released to the press on the understanding that the company name would be mentioned at least once.

Teacher Donna Sheridan, 35, said: I used to enjoy sex surveys, but I’ve started getting bored with their small sample sizes and shoddy methodology.

Perhaps if they started experimenting with different font sizes, radical typefaces like ‘Wingdings’, or weirder questions like ‘Have you ever painted your whole body green then seduced your lover while wearing a gas mask and holding a kumquat?’ it might spice things up and revive my flagging sex survey life.

Joey Barton 'based personality on Swayze in Road House' 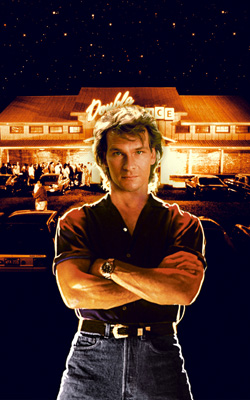 FOOTBALLER Joey Barton has confessed to stealing his philosophising tough guy persona from the lead character in the 1989 movie Road House.

The film, regarded as a cult classic, stars Swayze as a professional nightclub bouncer and is famous for lines including ‘Nobody ever wins a fight,’ and ‘Be nice until its time not to be nice’.

QPR player Barton apparently saw the film on Channel 5 while at the Sporting Chance clinic and realised he could belt as many people as he liked if he came out with a few supposedly deep statements in between.

He said: It started at City when I got a red card and told the lads, Take the biggest guy in the world, shatter his knee and hell drop like a stone.

I thought theyd know it from the film, but Stuart Pearce nodded slowly like Id said something really wise and I realised I could get away with this.

You should have seen Alan Shearers face when I said I used to fuck guys like you in prison’. Although thinking back on it I’m not sure whether that was anger or mild arousal.”

QPR manager Mark Hughes said: Like most men, the only Patrick Swayze film Ive seen is Point Break so I thought Joey was quoting proper philosophers like Plato and Decartes.

The news is going to hit DJ Campbell the hardest, though. Hes just had Marcus Aurelius saying Pain dont hurt tattooed on his leg.